A Cursed Shoot with an Angelic Crew and Actors

A crew bands together when disaster strikes 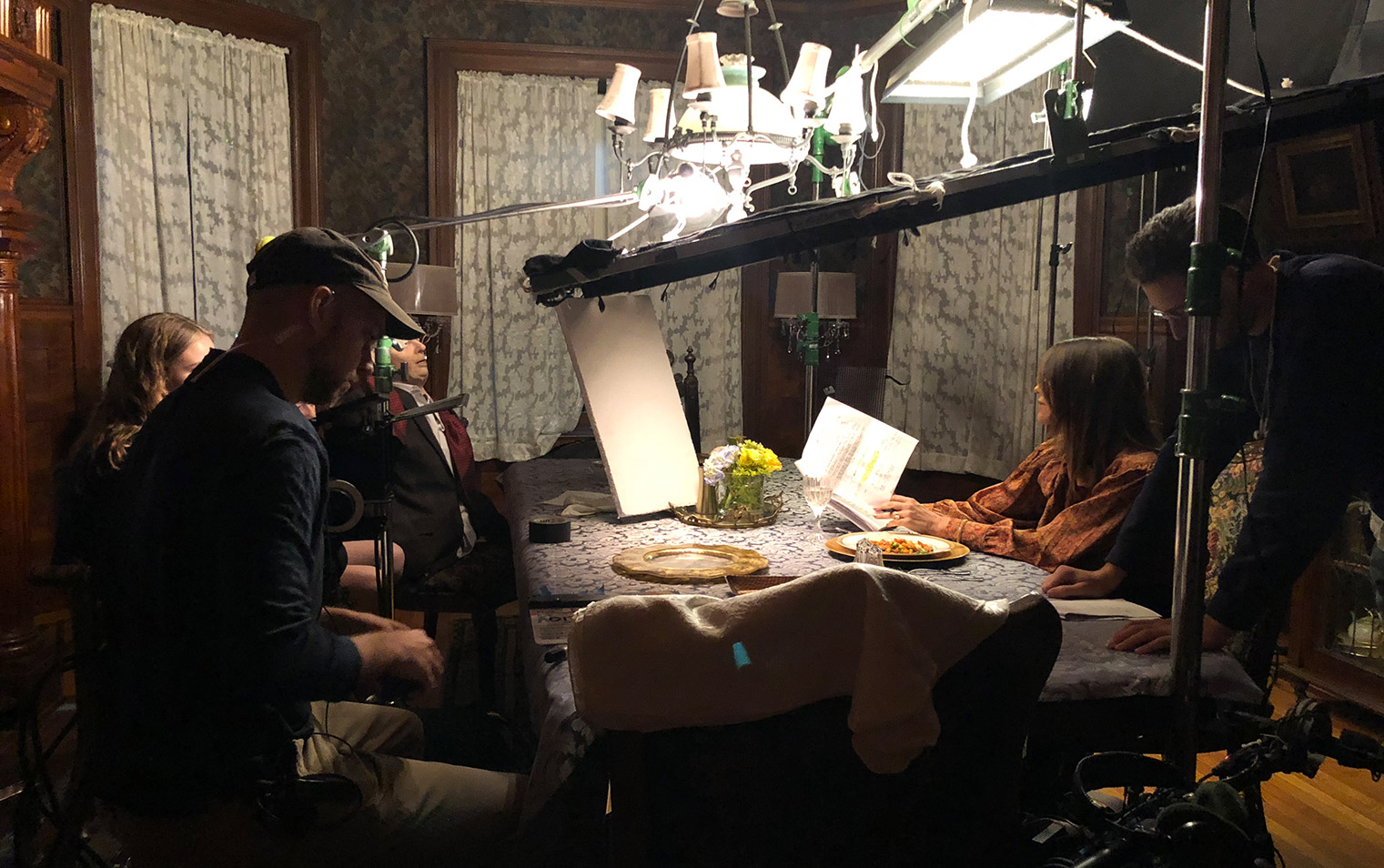 A few days before we shot Father Figurine, I sat down for an interview with Austen, who was helping shoot the behind-the-scenes video for SHIFT, and he asked how it felt to prep a movie so quickly after spending so much time writing the script. Austen was trying to get at the idea that once you actually go and make the thing, it suddenly becomes this huge crunch, but I genuinely didn’t feel that way about pre-production. Sure, there was lots of work to be done, but once we got the grant, we had about three months to prep the project, which was more than enough time for a short, and I rarely felt rushed.

If only he’d asked the question after the shoot.

This isn’t a surprise to anyone who’s ever made a movie, but production is incredibly stressful. It’s also incredibly fun and rewarding — but it’s mostly stressful. And Father Figurine was one of the most stressful shoots I’ve ever been on. Since the shoot, my producers and I have been wrapping our heads around Why? What about this shoot was more stressful than others?

It definitely was the most ambitious short we’ve made, and we were trying things we hadn’t tried before (extravagant set design, working with a prosthetic corpse, etc.) And it definitely had to do with the fact that we were trying to accomplish all of this on a tight schedule and with a small crew (something we were used to doing, but on smaller shoots). It also definitely had to do with the fact that Murphy’s Law was in full effect. It’s standard practice for things to go wrong on set, but this was the first time I’ve been on a shoot where people said that they thought it was cursed.

On day 1, we had an extremely early call so that we could arrive at location, which was an hour outside New York City, at 6 a.m. to shoot our first exterior scene in the morning light. Once we arrived, my producer opened the equipment truck to find . . . it was empty. After getting over the initial shock, he quickly realized that the bonded lot where we left our truck overnight had given our PA the wrong truck that morning. So, someone had to drive back into the city to get it — in rush hour traffic. Our first day had just started and we were already four hours behind . . . yeah.

That’s when someone said that they thought the shoot was cursed.

Luckily, the truck just had the camera equipment, so art and wardrobe could load in, and we could start art-ing our interior scenes for the day. By 10 a.m., our camera equipment had finally arrived, and everyone moved fast to set up the first scene. It was overcast that morning, so the light outside retained a feeling of gloom that was integral to the scene. And just as we finished getting our coverage, the sun came out, completely changing the look outside, but we had gotten the scene in the can. It was a small but much-needed sign that everything was going to be okay.

That doesn’t mean that we were in the clear. That afternoon, the power went out at our location, and no one could figure out why. We were filming at a mansion in Long Island with no cell phone service, and with the power out, so was the Internet, our only way to communicate with the outside world. One of the homeowners left to find out what was going on and came back to report that a tree had fallen over and knocked out a transformer. That’s when someone said that they thought the shoot was cursed. 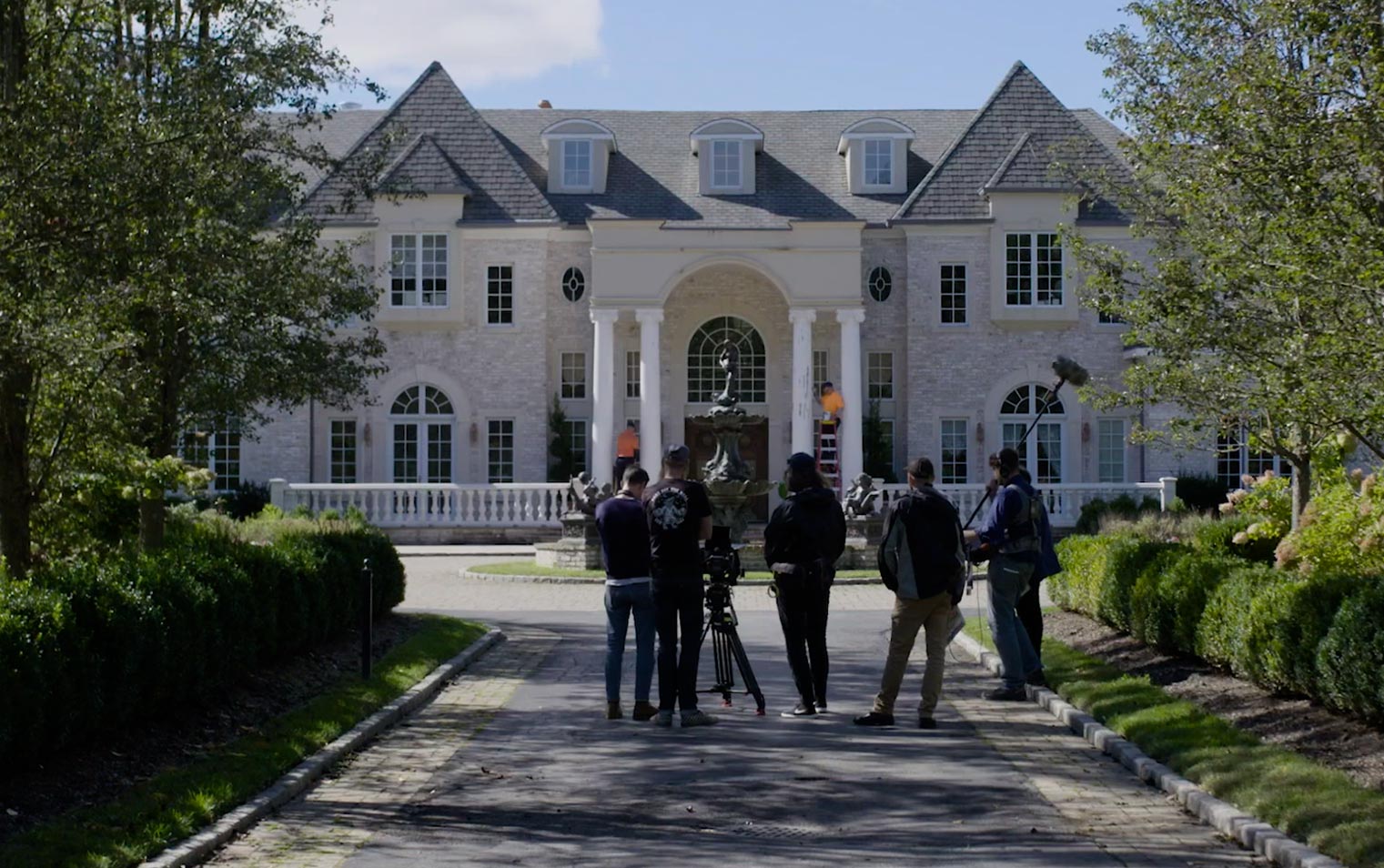 Thankfully, we were running everything on generators (a last-minute request by the homeowners), so the outage didn’t actually affect production, and we soldiered on without any more major mishaps. But we were still up against the clock.

Starting our shoot so far behind resulted in my team playing a constant game of catch-up while doing our best to hide our stress from the actors. Any time we had a moment, we would huddle up and adjust the game plan. It was tough, but a nice reminder that I had a great group of people helping me and that we all had enough experience on set to calmly deal with these situations without melting down. And I think it was our temperament and ability to work together that stopped the shoot from entering disaster territory.

There was also one other saving grace: our actors.

Thespians to the rescue

On all of my projects, I’ve worked with really great actors, but man, did I get lucky with this one. I mentioned in my last post that we were able to get an incredibly talented actress and my first choice for the lead role; I didn’t mention her name out of fear that she would back out at the last second because something better came up, but it was Amy Landecker. The entire time she was involved with the short — from her first meeting with me to the finish line — she expressed nonstop positivity, excitement, and total trust.

. . . the best parts of the shoot were whenever we were rolling, because their performances were so good that we could actually forget about all of the stressful production details and just enjoy ourselves.

And she wasn’t the only one. Across the board, the cast was awesome. For the roles of the children, my casting director Karlee Fomalont gave me a list of people she thought would be great for each role, and from those lists, we also got our first choices: Katherine Reis from the shows Claws and Rise and Ryan Foust, who starred as Charlie in Charlie & the Chocolate Factory on Broadway. Though I was slightly nervous to cast people without auditioning them, it became clear when I met with them before the shoot that they were perfect for the roles and wonderful to work with. In our meetings beforehand, we went over the script, and I helped them understand the tone I was going for (dry, stilted absurdity) without making them feel like robots. By the time we got to the shoot, everyone was completely on point.

Every actor has a different approach, and this group was no different. Each of their different approaches complimented the process as a whole and made them feel like a cohesive unit. For example, Amy was down to have fun with the absurdity and said she would do things as many different ways as I liked, while Katherine asked a lot of great questions about her character that helped flesh her out more, and Ryan just needed to know what emotional register to be in. An actor doing all of those things would make for a great creative collaborator, and they all had other aspects to their approaches, but I found it interesting how each of their approaches were fairly different yet equally beneficial from a creative standpoint. They also really enjoyed each others’ company and had a good time on set, and their positive vibes really rubbed off on the crew. In fact, the best parts of the shoot were whenever we were rolling, because their performances were so good that we could actually forget about all of the stressful production details and just enjoy ourselves. And seeing the material come to life genuinely made me feel that all of this hard work was worth it.

Although we started the shoot with a huge delay, we somehow managed to get almost everything we needed; anything we didn’t was second-unit material. It was a great exercise in making real-time decisions about what your most important material is, and while it’s difficult to do, I had thankfully put some thought into it before the shoot, so when it came time to actually cut, I already had ideas. I’m sure I’ll regret making some of those cuts in the long run, but at least I know they weren’t completely impulsive decisions. And aside from the general stress of playing catch-up, we got through the rest of the shoot relatively unscathed.

But once we wrapped shooting, shit got weird. First, while we were loading out, our equipment truck died. Once AAA showed up and we were all loaded out, I was riding home in my producer Ben’s car and other crew, debating whether or not the shoot was actually cursed. As I was trying to argue the case that it wasn’t, Ben got a flat tire. So, yeah . . . this shoot was definitely cursed.

It really is crazy to think how much time and thought goes into a project before you shoot it, whereas production is basically a sprint with hurdles, except instead of jumping over hurdles that are already placed on the track, they’re thrown at you at completely random intervals, and sometimes they’re the size of equipment trucks. It takes a lot of planning to get through a shoot successfully, yet no matter how much you plan, something — well, actually, numerous things — will happen that’ll force you to change the plan or come up with a new one. And the only way to get better at doing that is to have experiences like these. So, while I can’t say that the shoot for Father Figurine was smooth by any means, I can say that we learned a lot, and we got what we needed to make a good movie. That’s all I can really ask for.

Matt Kazman has directed numerous digital series, including “Love’s a Bitch” for Bedrocket Media, which was based off an independent television pilot he created, and “Alive in Denver” for Fullscreen, which screened at the 2018 SeriesFest and the New York Television Festival, as well as episodes of “Middle of the Night Show” for MTV and numerous branded and commercial works. His biggest creative joy arises from making short films, which have been his most well-received. Kazman's film Killer premiered at the 2016 Sundance Film festival while winning awards at the Seattle International Film Festival and IFFBoston, among others. He is a recipient of the 2018 SHIFT Creative Fund.
Read more by Matt Kazman