Diversity and Deflection in Hollywood 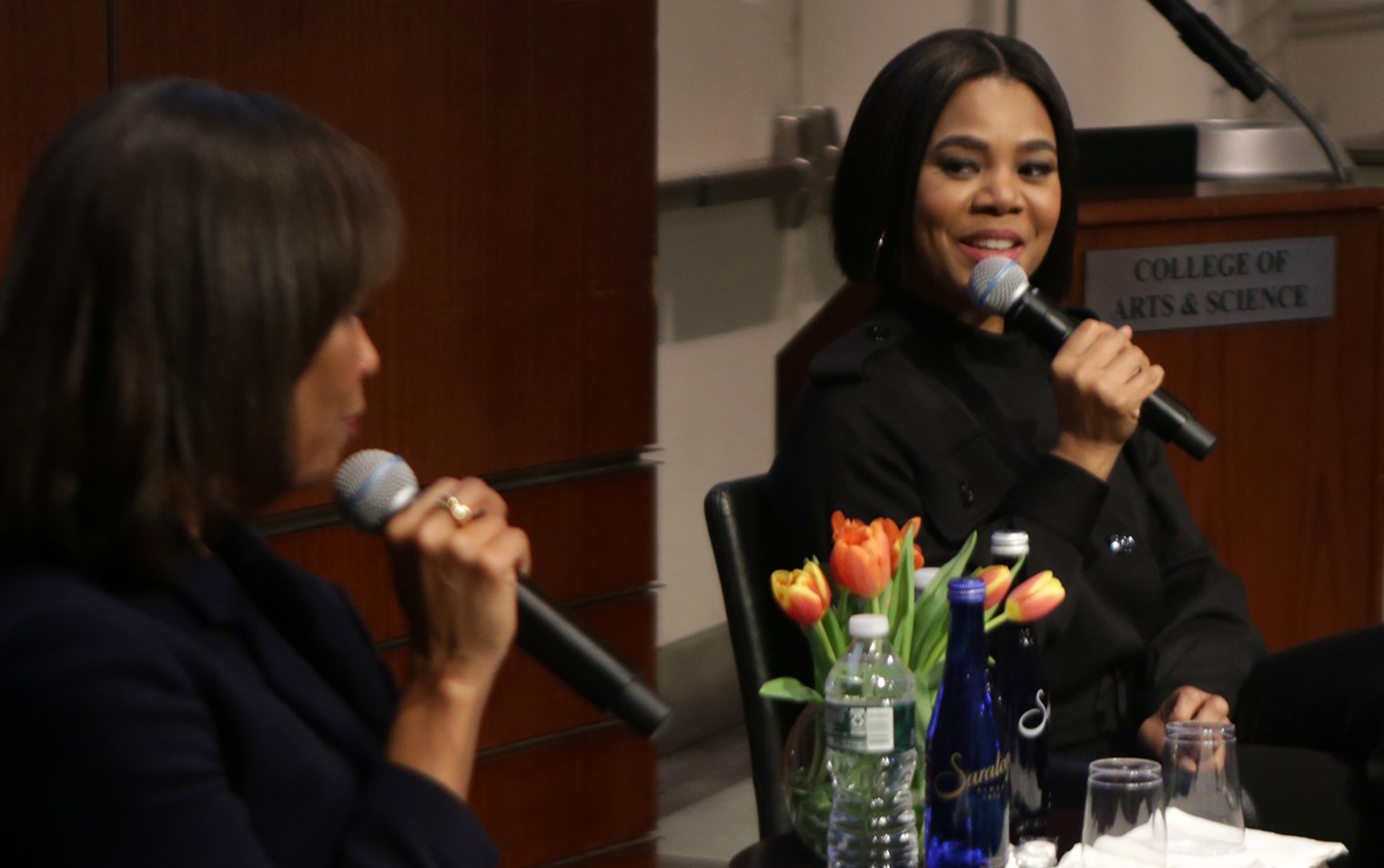 When Regina Hall won the New York Film Critics Circle Best Actress award in 2018 — a nod to her work in the surprise indie hit Support the Girls — she was the first African American to receive the honor in the eighty-three-year history of the organization. Hall, a veteran actress with thirty-five film roles — Scary Movie, Love and Basketball, and Girls Trip among them — and more than a dozen television roles, including Coretta Lipp on Ally McBeal and as Dawn Darcy on Showtime’s Black Monday  — is an artist with a continually rising reputation, but she’s still subject to institutional discrimination in an industry where change and diversity are crawling along.

“You were what [Girls Trip director] Malcolm [Lee] called ‘definitely black-famous,’” says Pamela Newkirk, journalism professor at New York University and author, most recently, of Diversity, Inc., a hard-hitting examination of the ways in which corporate America has made a business out of promoting diversity without actually affecting real change. Newkirk, a long-time mentor and friend of Hall, who was once her student, tackled the weighty and far-reaching topic of diversity in the entertainment industry at a recent event. Organized by NYU’s Institute of African American Affairs and the Center for Black Visual Culture, Newkirk and Hall’s discussion focused on race and media.

It’s a serious issue in Hollywood, not just in what Newkirk called “Black Hollywood,” which describes the community of film, television, and production people in the Los Angeles area (or, arguably, Atlanta, where Tyler Perry Studios is the cornerstone of the city’s rising entertainment industry), but on every level of the business. Throughout the production industry, from on-camera talent to the most junior assistant, groups that have been traditionally left out — women, people of color, LGBTQIA, the disabled — are still seeking broader representation, and it’s an uphill battle.

“Histories do not change until structures change”

And the structures of the production industry are morphing gradually at best, said Newkirk. A recent Writers Guild of America West report singled out systemic discrimination against writers from historically underrepresented groups — specifically women, people of color, seniors, and the disabled — particularly in the hiring practices for TV writers.

“When you drill down on specifics, it’s not nearly as diverse as you think,” Newkirk said.

But other facets of the production business are marking substantive changes. A November 2018 report from the Director’s Guild noted that women and members of minority groups directed half of all the 4,300 episodic TV shows made in 2018–19, up from 21 percent in 2013–14. Other notable changes included: 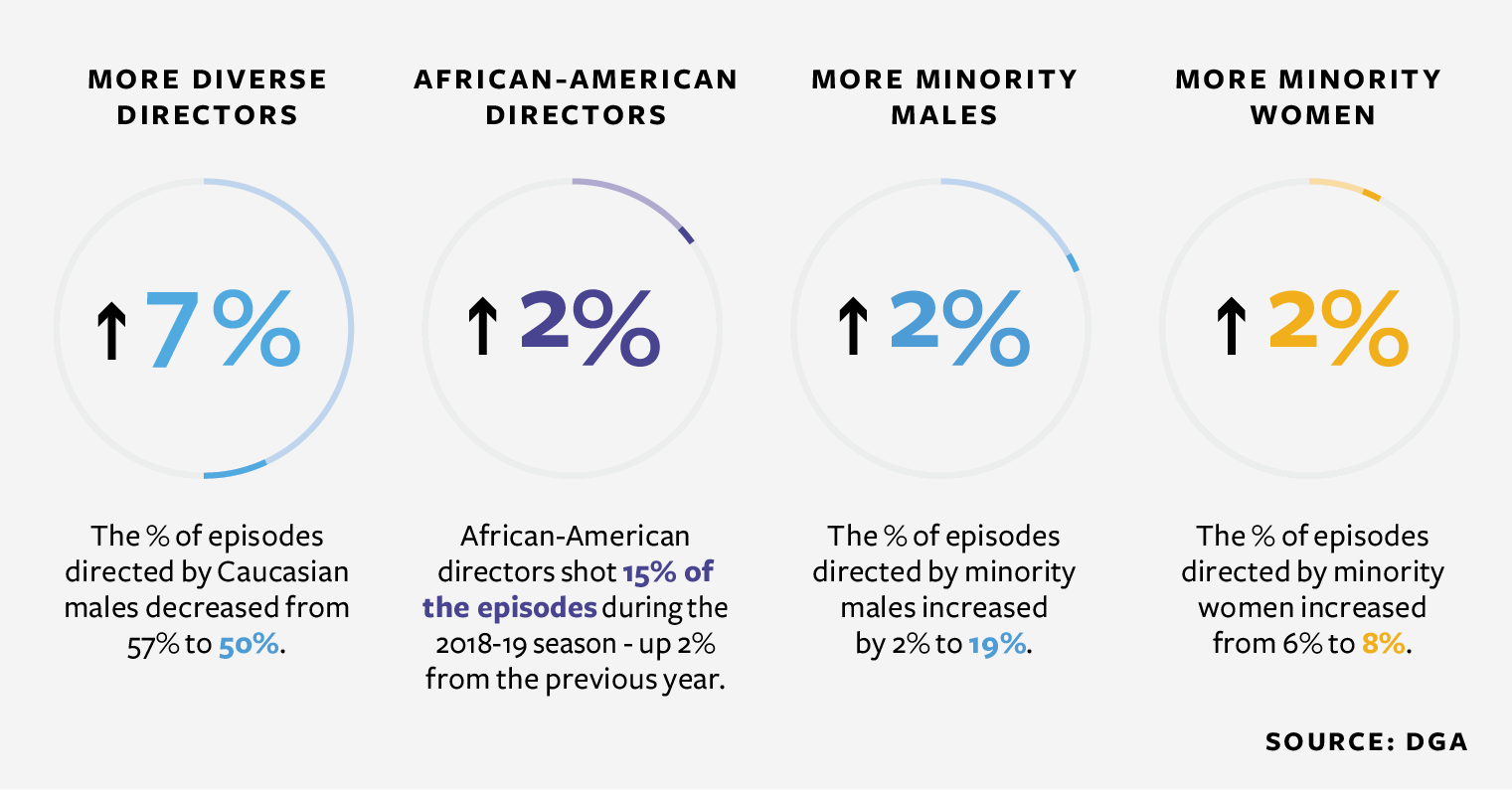 Still, the report noted that the number of white directors dropped 5 percent from the previous year, with 71 percent behind the camera of shows made in 2019.

The Think Tank for Inclusion and Equity, a consortium of working TV writers “committed to increasing inclusion and improving working conditions for all writers, in particular those from diverse backgrounds,” sounded a less upbeat note in its own Behind the Scenes report released earlier this year. That survey showed diverse writers are “routinely isolated within writers rooms, often relegated to the lower levels where writers possess little agency or power to contribute” and that “a majority of diverse writers have experienced some form of bias, discrimination and/or harassment in the writers room” while also being held back from professional advances to the top ranks of the profession.

These results echo Newkirk’s critique of corporate practices that have co-opted real inclusion through official and unofficial diversity-designated positions that offer a fig leaf without supporting a genuine widening of opportunities.

“Diversity has been stretched to cover so much ground that the unfinished business of the civil rights movement has been lost,” Newkirk said. “Metrics are even worse than I thought. In every intellectual field, the numbers are similarly bleak.”

The Think Tank for Inclusion and Equity survey supports her observation, noting that “almost half of diverse writers get their first/second job as a ‘diversity slot hire,’” often through fellowships and other programs that are subsidized, effectively providing employers with discounted labor.

And in the even smaller and more fiercely competitive field of feature films, there’s still a sense that diverse talent is a sort of commodity. Hall, an actress at the top of her profession — she’s been compared to both Meryl Streep and Lucille Ball — still finds the inertia of white males atop the power structure frustrating.

“It’s not conscious — it’s Hollywood,” she said. “I am a woman, and it is always harder for women. Black actresses — there’s maybe ten of us, and there’s often [the attitude] ‘If you can’t get this [black actor], get that one.’”

Hall said that for every casting director who put her in a role people saw on screen, there were innumerable rejections, even as her resume and critical reception made her more visible.

How does that change? With some solidarity and conscious efforts, said Hall, “when people around you fight to expand the vision of what you can do.”

Substantive diversity may well be gaining momentum: The 2019 New York Film Critics Circle Award for Best Actress went to Lupita Nyong’o, the Kenyan-Mexican actress whose star turn in Us directed by Jordan Peele, an African-America sketch comedy star now directing horror films that center around themes of racism in the United States, established another artist who’s moving the needle for change.