Editor Liza Cardinale: From Backstage Tapings to an Eddie Nomination

Dead to Me is anything but. Editor Liza Cardinale on her first Eddie nomination for the Netflix hit show.

Liza Cardinale is an in-demand editor for shows like Outlander, Orange Is the New Black, and Insatiable. Her father was a writer for shows like Family Ties, so she received her introduction to the world of television at a young age, with backstage visits affording a peek behind the Hollywood curtain. “[It] made me feel like, ‘Ooh, maybe I could do this. Maybe I have access somehow,’” she recalls.

While studying film theory at UC Berkley, she stumbled into editing on a tape-to-tape system without any formal training. Later, she would tag along with a friend who was a film assistant for Jonathan Demme on The Truth About Charlie. There, Cardinale met Carol Littleton, A.C.E. “[Carol] is just legendary. She’s amazing,” Cardinale says. “And she brought two cats with her to work every day. I thought, ‘These are my people.’”

Cardinale began her career as an assistant editor with a mercifully short gig at Playboy. “It was softcore pornography. It was funny walking up and down those halls and hearing all the sounds coming out of the rooms,” she says. “It definitely wasn’t a passion project for me.”

She worked her way up through the ranks, eventually making the jump to the editor’s chair on The Neighbors and working steadily as a television editor since.

Cardinale recently received an American Cinema Editors nomination for an Eddie Award for her work on the pilot episode of Dead to Me, exclusively on Netflix. We spoke with her about the challenge of calibrating the show’s unique tone.

New life: Dead to Me

Fresh off a stint on Orange Is the New Black, Cardinale found a new gig when a résumé she shared with a colleague found its way to Cardinale’s former coworker, a producer for Dead to Me. He asked her to meet with series creator Liz Feldman right away. Feldman, herself a lesbian stand-up comedian, responded to Cardinale’s work on Take My Wife, a show by and about a lesbian stand-up comic. They clicked. Such are the serendipitous paths to employment in Tinseltown.

Cardinale interviewed on Friday; production began the following Monday. She hit the ground running, ready to tackle the pilot. Broadly speaking, Dead to Me follows Jen (Christina Applegate), a high-strung widow, and her burgeoning friendship with free spirit Judy (Linda Cardellini), whom she meets in a grief counseling group following the death of Jen's husband. 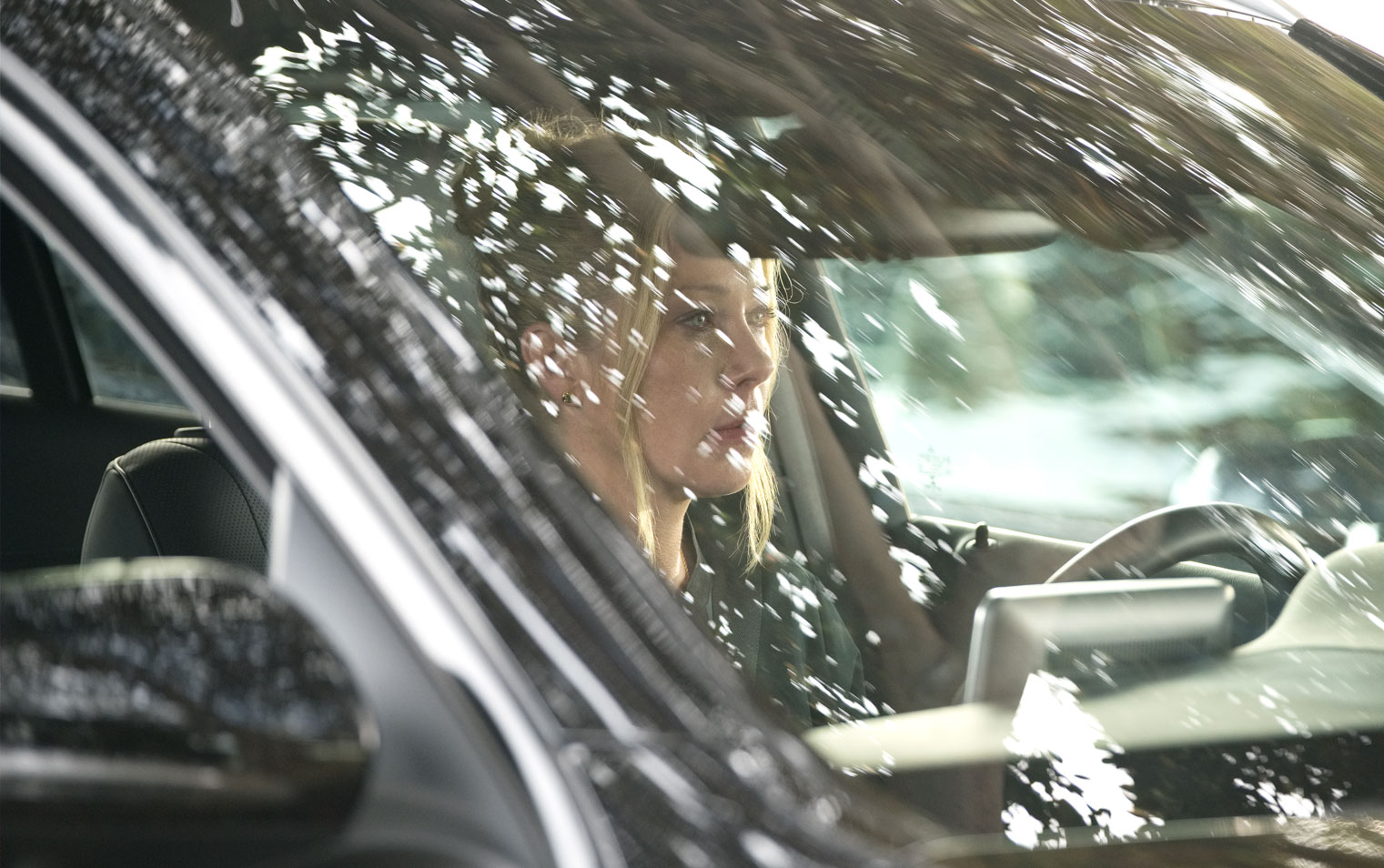 “It was a super crazy first day because they were all freaking out about a scene that they were thinking they needed to reshoot and rewrite and do some pickups on. So I had to cut the scene. It was the scene where Judy in the grief circle finally admits that Steve is not dead and then talks about her miscarriages. So it's a pretty big scene,” Cardinale says.

“And then I’m trying to figure out, like, what’s the tone of the show? I have no idea. This is also the first day of shooting, so the actors don’t quite know the tone yet. Some people are really playing the comedy hard and broad, and other people are keeping it close to the vest. So, yeah, it was scary,” Cardinale remembers. “I showed Liz, and then Liz said, ‘Okay, okay, I think I know what I have to do.’ And then she wrote new bits of dialogue for Linda Cardellini, and they lined up the location and shot again. But yeah, that was intense.”

Indeed, the tone of the show is difficult to describe. There are thriller elements as Jen searches for the hit-and-run driver who widowed her, comedic stretches featuring the odd-couple pairing of the two leads, and moments of profound grief and betrayal. Somehow, these disparate elements gel into a cohesive whole, but it wasn’t a straightforward balance to achieve.

“The pilot took a really long time to get right. It was 46 minutes long and just played like a drama. It was so emotional partly because that is what I’m good at, bringing emotion to it,” Cardinale says. “But Liz was very concerned that people wouldn’t know this was a comedy. How do we preserve the emotionality of it and the sincerity but also give people permission to laugh?”

“How do we preserve the emotionality of it and the sincerity but also give people permission to laugh?”

The answer to that question was, in part, to move an existing scene — a well-meaning but obtuse neighbor delivers her condolences and presents Jen with “my take on Mexican lasagna” — from later in the pilot and make it the opener, replacing a scene of Jen alone in her car, crying. It encapsulated the show’s gallows humor and placed the audience in the right frame of mind.

The idea of reordering the scene came from an unexpected source: Netflix. “Usually Netflix doesn’t even give notes that are that dramatic, and it really changed the structure,” remembers Cardinale. “But this was one where we tried it, and even Liz was like, ‘Goddammit it. It really works.’”

Other editorial decisions involved excising scenes that, while fine, skewed heavy. Instead, they leaned into the relationship between Jen and Judy. Cardinale explained her reasoning: “The Dead to Me pilot is kind of like a rom-com, structure-wise. These two people have to meet, they have to fall in love, they have to break up, and then they have to get back together. That's a lot to accomplish in 30 minutes or less.”

Consequently, the middle of the episode is devoted to meticulously building their friendship, inching them closer in a believable way. It culminates in Cardinale’s favorite scene: a tender moment over a shared joint on the beach at night. But when Jen discovers that Judy’s dead fiance is neither dead nor her fiance, she’s enraged, and she confronts Judy at the grief circle.

The difficulty of creating a good “table scene” like the grief-circle confrontation is lost on the average viewer. The editor juggles geography, relationships, numerous characters, and a mountain of coverage to craft a seamless final product. Cardinale elaborates on her approach: “When I’m assembling scenes like that, I get an idea for the footage, but I don’t watch all the dailies before because it’s just too much content, and I’m not gonna remember it. So I’ll watch a wide, and I’ll certainly watch all of the close-ups of my lead actors. But when it comes to when we’re turning to this guy for his line or that lady for her joke, I only look at the angle that makes sense at that moment. So if it’s from my main person’s point of view, I’ll look at that camera.” 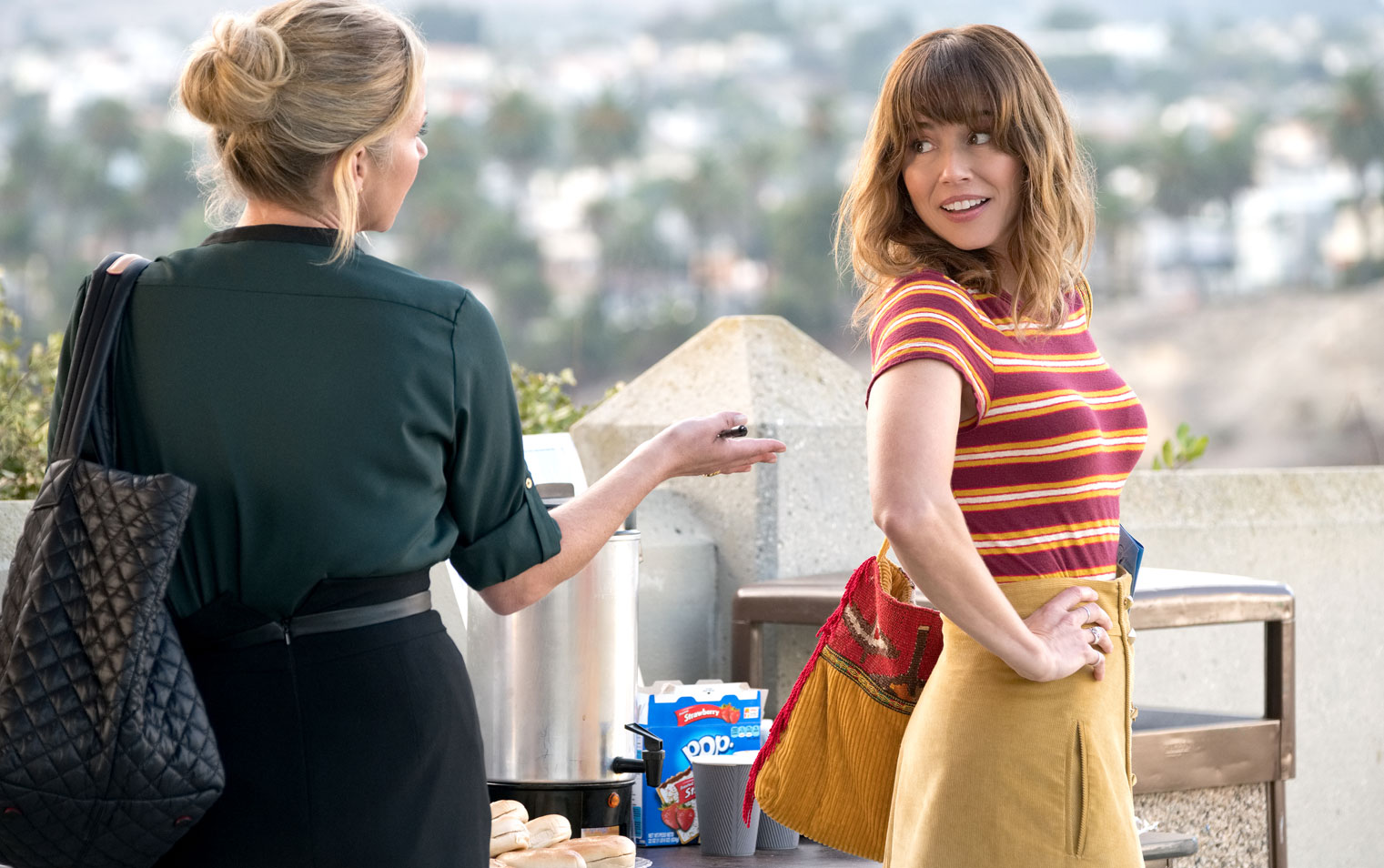 Furthermore, Cardinale says, “You want to make sure it always feels like you’re oriented and in space and time as an audience member and that you’re always oriented with your lead.”

And the finished grief circle scenes that bookend Jen and Judy’s friendship are considerably shorter than what Feldman scripted.

“All those grief-circle people had their own stories to tell, and at the end of the day, it just felt like ‘grief circle’ is the theme of the show, and that’s not what this show is,” explains Cardinale. So they pared it down to focus exclusively on the friendship between Judy and Jen and calibrating that connection’s progression.

“Like, what level did they need to connect in the early grief circle?” Cardinale asks. “Just a little, just a hint of it. But enough get Jen to call [Judy]. But it didn’t have to be huge. It just had to be like a little tease, a little flirtation of connection.”

One of Cardinale’s go-to techniques for establishing emotion and tone is a skillful deployment of musical cues. Recalling her work on Outlander, she says, “I find music helps a lot in situations like this because, if the music can swell as your emotion is swelling, it's this perfect marriage that squeezes tears out of me every time.”

But in Dead to Me, the score rarely intrudes into the dramatic scenes. “I couldn’t use my old tricks on the Dead to Me pilot cause if I tried to, Liz would just have me take it out,” Cardinale says. “She just wants a little bit of a tiny, subtle lift from the music. She doesn’t want to rely on it like a soap opera would.”

“It was so nuanced. Her discussions about not only acting but also the music. It was such shades of gray at all times,” says Cardinale. “That’s when you have a really good script, and nothing’s broken and needs to be fixed, then you have the luxury of getting into nuance.”

That allegiance to nuance caught the attention of Cardinale’s peers and resulted in her Eddie Award nomination for Best Edited Comedy for Noncommercial Television. The recognition means a great deal to her. “These are people that I have idolized for many years. I've gone to every event. I've worked the door at Eddies so that I could get in free,” Cardinale says. “It [feels] totally surreal. And then I’m reminded, usually by my best friends, ‘Hey, you’ve worked really hard for this. You’ve worked very, very, very hard for fifteen-plus years in this industry, and you have earned this, and you need to own it.’ I find that hard to do, but I’m very, very grateful.”

Cardinale will continue her work on season two of Dead to Me and would love to someday work on a feature rom-com, her favorite genre. “That’s on my bucket list,” she says.

She’d also love to continue working with women showrunners and doing stories for and about women. “It just feels like a better fit for me and my strengths as an editor,” Cardinale says. And those strengths, as fans of Dead to Me can attest, are considerable.

A graduate of Columbia University's MFA film program, Avram Dodson has won awards at The Hamptons International Film Festival, Austin Film Festival, and SXSW for his films. His screenwriting has been acknowledged by the Alfred P. Sloan Foundation and Columbia University’s Blue List. Avram was editor of a feature film by DGA award-winning director Miguel Silveira as part of the IFP Film Lab 2017. Currently a resident of Miami, Avram is editing a feature documentary on Tom Wolfe.
Read more by Avram Dodson