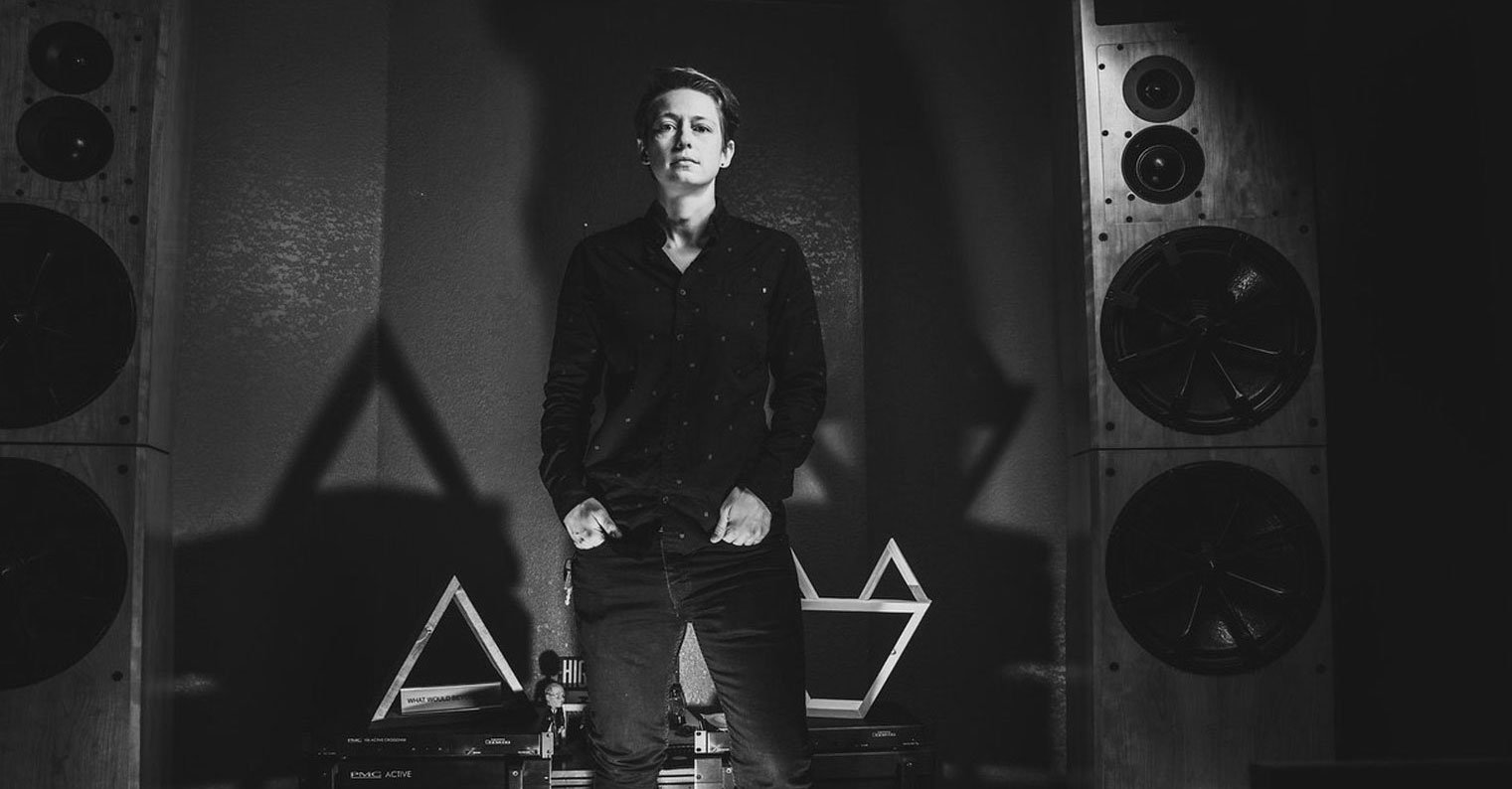 Piper Payne’s got a lot to be stoked on, a phrase she uses often. The new EP Visions from Madame Gandhi, former drummer for M.I.A., that Payne mastered just dropped. She also started a new project for Cartoon Network’s Steven Universe in February, and there’s lots of lacquer cutting ahead. Payne, a mastering engineer with studios in Oakland and Nashville, got her start apprenticing under mastering greats Bob Katz and Michael Romanowski.

She went on to found Neato Sound (recently absorbed by Infrasonic Sound) in Oakland, formed a long-time teaching relationship with San Francisco’s Women’s Audio Mission, and has spoken on panels and at conferences like NAMM. She also continues to co-chair the Diversity and Inclusion Committee sanctioned by the Audio Engineering Society (AES), “which,” Payne emphasizes after explaining how she co-founded the committee, “was a pretty monumental undertaking: to have this seventy-year-old, white, male-run organization bless this idea.”

Besides Madame Gandhi, Payne’s mastered albums for Third Eye Blind, Geographer, The She’s,  and many others. She’s been involved in a lot of envelope-pushing projects over the years, too. For one, she’s a female mastering engineer, an anamoly in and of itself. “I became kind of a reluctant [equity] leader in the music industry,” she says.

The idea used to tire her out, but now she embraces it. “I long for the day I won’t get asked, ‘What’s it like to be a woman in the audio industry? Or an email saying, ‘I had a terrible experience, please help me. What advice do you have?’” Until that shift occurs, Payne will continue to fight the good fight. She’s a mentor and an educator, a spokesperson and an advocate. But first and foremost, she’s a mastering engineer.

You say tomato, I say to master

Mixing. Mastering. Who does what? Who can do both? Many mistakenly believe that an audio engineer can do both, but for Payne, a “mixing studio and a mastering studio are very, very different in terms of the listening position, the gear that’s there, the monitoring systems, the way the room is designed, and the engineer that’s sitting in that spot. A mixing engineer and a mastering engineer are two very, very different types of engineers.”

“I long for the day I won’t get asked, ‘What’s it like to be a woman in the audio industry?’”

So what is mastering? It’s the step after the album has been recorded and after a mixing engineer has come in and made each component — all the instruments and vocals — sound not just their best, but how the artist wants them. Then, a mastering engineer like Payne goes through the entire album and listens second by second for any discrepancies or offness in sound: Are there pops, clicks, fuzz, or distortion? On a ten-song album, are the levels consistent from one track to the next? “It’s about three things: quality control, format conversion, and it’s the end of the creative process and the beginning of the manufacturing process,” says Payne. Payne receives albums in all sorts of formats: CDs, cassettes, digital files. “Sometimes I won’t get the record until the day of mastering,” she says. “Stuff comes in from all different places and all different formats, and it’s my job to make them go together onto a full, cohesive album. A lot of times that’s negotiation between me and the mixing engineers or me and the artist, trying to figure out, like, how do we take a duck and a goose and a pigeon and make them into a leopard?”

It’s Payne’s job to help the artist all the way through to the point of releasing the CD or vinyl LP. A good engineer will create a master that’ll translate to as many systems as possible and will check for quality control or the correctness of the album before it goes out into the world. “It’s going to play back flawlessly, and without any errors, and will have the correct metadata following along the album so that the artist can collect the royalties that they deserve for their work — if those things are executed properly, then my job is done,” Payne says.

Below is a screenshot of what Payne sees when she’s mastering a track; in this case, “See Me Thru” off Visions. The top pane on this screen shows the master while the bottom shows the mix. Payne explains, “The first four clips you hear the mix and master side-by-side without level compensation. The last five clips have level compensation to show the master and mix without the coloration of a volume jump.”

Listen to the line “I’ve been lost for a little while” to hear the compensated sound. Then listen to it after it’s been mastered. “Pay attention in particular to the evenness in the bass,” says Payne. “The clarity in the vocal, the reverb/FX levels, and the stereo image in the mix versus the master.”

For a well-recorded production like Madame Gandhi, we don’t hear a lot of the crackles and pops you would were this recorded in, say, the artist’s basement, but we’re hearing that sharp, clean, cohesive sound throughout this track and on the full EP. Check out “Young Indian” and listen to how warm and crisp it is, especially when those basslines and fat drums pick up at 0:55.

Getting to the best place

For all that goes into creating an album — the songwriting, music writing, recording, producing, mixing — you want it to sound solid and flawless at the end. For emerging artists who haven’t been through the process or have no manager to guide them, how can they get their album in the best shape possible before handing it over to a mastering engineer?

Payne’s biggest advice to emerging artists is: “You get what you pay for.” She often sees posts on places like the Balanced Breakfast Facebook group, where artists ask about fair prices for recording or mastering. It’s difficult to find a quality engineer for less than $100 a track, especially in the Bay Area. She’s done the numbers. “Based on rent, assistance, cost of gear, marketing, running the business, running the website, paying for insurance. All of that. Anyone who’s not charging that much is not actually a full-time mastering engineer,” says Payne.

She sees a lot of engineers in survival mode right now, particularly in the Bay Area. “I’m going to say something that is going to be a little controversial, especially in the Bay,” she starts. “There’s a predatory situation going on where recording engineers and mixing engineers will say, ‘Yeah, I can master that for you when all they’re really gonna do is throw an L2 [a limiter on the master buss] on there and charge you more than I probably would have done to take care of each song individually.”

When someone isn’t trained in fine-tuned listening and tinkering the way a mastering engineer is and doesn’t have the same equipment and setup, they won’t give each song the individual attention it deserves. It’ll show in the final product. Automation and technology are never as reliable as a real person mastering each song in real time.

“The idea that slapping an L2 on a master buss is ‘mastering’ is laughable, but it’s sometimes the only reality that an independent or budget music project is capable of. The issue comes when a mixing engineer is charging major dollars for that process and calling it mastering,” Payne says. “You'd usually hear distortion, high frequency grittiness, aggression, stereo image collapse, and/or inconsistencies between tracks.”

Payne recommends that new artists budget at least $1,000 to master a full album (at least in the Bay Area) and to be wary of quotes that jack up the price for a “shitshow,” as Payne lovingly refers to a poorly mixed album. “If it’s totally screwed up — there’s pops and clicks all over it, and they want that cleaned — obviously that’s going to be a different story and a different bill,” she says. “But if they say, it’s imperfect, the bass is all messed up, the top end’s messed up, the vocal doesn’t present right — I’ve got the same tools that I’m going to use for every single project, no matter what. It’s just that I’m going to use them a little bit differently. That doesn’t add time to the project.”

Nor should it add to the bill. “Every mastering engineer is different,” Payne explains. “My time to master a shitshow versus a really great album is usually around the same amount of time.”

She pauses here to underscore what she says next: “I’m never going to let something out of the studio that I’m not stoked on. So we’ll just start there.”

“Sync is a great way to make money on your music”

Besides setting aside the right amount of funds, Payne recommends sending songs over in 24-bit WAV files to an engineer and to think about sync placement. That is, if an artist is interested in having their songs licensed for use in radio, they’ll need to have a clean version of the song(s).

For television, they’ll want to have an instrumental mix of the song as well. Visualize, for instance, that moment in your favorite show where the dreamy college kid says something important to the dreamy professor. If there’s a song playing in the background, that song will be switched out with the instrumental version during the precise moment those dreamy lines are spoken, then switched back to the original version, but it’s got to be exact. “Sync is a great way to make money on your music, so that’s why I suggest all the time: If you’re thinking about sending [your music] into a sync or a licensing house for a TV show or a movie, advertising, whatever, you really ought to have the instrumental versions mastered as well,” Payne explains. “It’s just good practice.” These are all things that a good mastering engineer should review with their clients at intake.

One of the most common situations Payne finds is an album that’s got one standout song recorded at a higher end studio, while the rest are recorded in a basement. “At that point, I have to say: ‘Would you like me to dumb down your really, really good song, or would you like me to just do the best I can with the rest of them, and we’ll have one that’s kind of weird?” she says.

Historically, a primary mastering goal has been to make an album sound cohesive for the vocal centerpiece and instrumental levels to remain consistent throughout tracks. These days? “It’s kind of a toss-up,” Payne says. “I’ve had a couple of projects recently where the artist was like, ‘Look, I know these are all super weird, and if you can make them all go together, cool. But if you can’t, and it sounds funny or weird, just make each one its own perfect version of itself and cohesiveness be damned.’”

At bottom, artists should be on the lookout for a mastering engineer who’ll help facilitate their creative process and guide their album smoothly into the world, especially if they’re working with a smaller budget. You want an engineer with a freaky-good ear for inconsistencies, who cares about what they’re working on, and who they’re working for — someone to whom you can hand over your baby with the confidence that they’ll tie a careful bow on the end of your creative process and ensure the start of your manufacturing process is in good a place as possible.