How Freelancers Can Save for Retirement

With intelligent planning, retirement savings are within freelancers' grasp

“Gig economy” has been a buzzy term since at least 2008, when Airbnb was founded, but for those of us working as freelancers, gigs are nothing new. In a gig economy or “freelancer economy,” short-term, freelance, and independent contracting jobs are the norm. These gigs can function as small supplemental streams of income or entirely replace full-time employment. Within the next five years, forecasters predict the majority of the U.S. workforce will be working or have previously worked in a freelance capacity.

But because student loan debt is higher than it’s ever been and the current generation is marrying, having children, and buying homes later and less often, how can freelancers and independent contractors working in creative fields even begin to plan for retirement?

The first and biggest roadblock to saving money is debt of any kind. An American freelance game developer working at a small video game studio in Copenhagen, Sweden — who asked to remain anonymous so he could speak freely about his finances — says student debt is a huge deterrent in building viable retirement savings. After he finished his graduate program, he spent the next three years working to aggressively pay off his debt.

“It wasn’t a great way to live, but after a string of high-paying jobs, I paid off all my loans,” he says. “It made little sense to start building savings at a low interest rate when I had student loans breathing down my neck at a considerably higher rate.”

If you can’t keep yourself from spending “‘imaginary’ money,” then credit cards might not be right for you.

The same wisdom applies to credit cards. When you don’t pay them off on time, their high interest rates can become a source of scary, unnecessary debt and negatively impact your credit score. New York Times bestselling author and host of the podcast Bad with Money, Gaby Dunn writes in her book of the same name that the safest bet is to treat credit cards like you would cash: Don’t bite off more than you can chew. If you can’t keep yourself from spending “‘imaginary’ money,” then credit cards might not be right for you, says Dunn.

On the other hand, responsible use can open you up to excellent perks, such as cash back, free flights, and even roadside assistance. Shop around before selecting a credit card to compare benefits, read user reviews, and know the interest rate you’ll be charged if you miss a payment.

Budgeting and the “latte factor”

Just as important for saving is creating a personal budget. Schultz recommends sticking to a four-part budget with every paycheck. Ideally, she says, you should put 60 percent toward fixed expenses, 10 percent toward retirement, another 10 into an emergency fund, and 20 percent for discretionary spending — or, as Schultz puts it, “what you go out to eat with.”

Fixed expenses include things like car insurance, health insurance, and housing costs. Paying for your own health insurance can feel like an astronomical task when you’re a freelancer, but not having it at all is a huge risk, with unexpected medical expenses the biggest cause of bankruptcy in the United States.

“Not having to worry about health insurance is a huge benefit,” says the Sweden-based game developer. “I’m able to save more and still live comfortably. More than anything, I don’t feel the same economic anxiety I often felt in the U.S.”

Until socialized healthcare becomes a legitimate option in the States, Schultz recommends setting up automatic withdrawal and using some of that 60 percent specifically for healthcare costs. One option is joining Freelancers Union, the largest organization representing freelancers in the country. It offers benefits like health and dental insurance; it also hosts gatherings to connect freelancers working in the same community. Membership is free and open to freelancers in all fields.

Have an emergency fund that can cover about six months of necessary expenses.

Putting a portion of each paycheck toward retirement savings and an emergency fund is equally valuable, what with the unpredictability of freelancing and the potential for temporary unemployment or underemployment. For those fallow periods, it’s good to have an emergency fund that can cover about six months of necessary expenses.

“I encourage people to automatically put a percentage of each check into a savings account that’s not so easy to get to,” says Schultz. If you receive $1,000 for a freelance project, for instance, you should really think of it as an $800 profit.

Discretionary spending is where most people, freelancers and salaried employees alike, can stand to cut back. It’s the idea behind author David Bach’s latte factor: Our small, seemingly trivial day-to-day expenditures can quickly add up, costing us more than we realize over the long term.

Rather than completely cutting something out of your budget, Schultz recommends downshifting. If you regularly order the largest, most involved latte at Starbucks, for example, opt for a tall coffee with cream one week.

When you’re ready to start investing in a personal savings account, it’s important to know how each type of account functions. The biggest difference between a traditional IRA and a Roth IRA is how your money is taxed. What’s compelling about a traditional IRA is the up-front tax deduction you receive when you put money into the account. With a Roth IRA, you won’t receive a tax break today, but your money also won’t be taxed when you extract it in retirement. The opposite is true for a traditional IRA.

Schultz almost always recommends opting for the Roth if you can. Consider this: If you put $5,000 in a Roth account today, you’ve lost the tax deduction, which is maybe worth $1,000 to you at the outset.

Another benefit of a Roth IRA is that you’re not obligated to start withdrawing its funds at a certain point. A traditional IRA involves a required minimum distribution, the minimum amount you’ll have to withdraw once you turn seventy-and-a-half years old. This can be problematic if you end up needing major dental work or, say, a hearing aid when you’re eighty-five.

Thinking about where and how to invest your money can be intimidating, because there’s an element of risk. For freelancers with an unsteady income, such gambles can seem especially daunting, but there are a few tried and true approaches.

For example, you could invest in individual stocks, but that’s like putting all your eggs in one basket, Schultz writes in Beginning Investing. To reduce your level of risk, invest in a manageable number of individual stocks — she recommends between ten and twenty — or stick with a mutual fund. A mutual fund is essentially a mixed bag of investments, some of which will be more successful than others, netting you a generally consistent profit over time. Mutual funds will give you a smaller return than individual stocks, but they also come with less risk, making them an ideal choice for investors with a limited amount to invest.

Investing in real estate can be another option for long-term savings, if the market is right. It’s an approach that helped production designer and art director Diana Kramer and her husband, both freelancers in the commercial industry. They purchased a condo in 2003, and when Kramer became pregnant in 2007, the couple was able to make a good profit on the condo and find a home quickly and easily.

“[The house] wasn’t in great shape, but it was in a great neighborhood,” says Kramer. “The market was really starting to plummet at that point. It sat on the market for months.”

Investing in rental property can act as supplemental income, too, if done well. That was the case for production assistant Jenny Boji, who moved to Los Angeles from Chicago in 2011. She rented out her place in Chicago before eventually selling it and purchasing a vacation home in California, which she plans to rent out on Airbnb.

Tracking what you make

As a freelancer, maintaining a financial calendar is an excellent way to track various sources of income and to calculate your deductions ahead of tax season, writes Dunn. It’s also important, she notes, to keep track of your mileage, healthcare costs, and personal business expenditures throughout the year, as some may qualify as deductions. 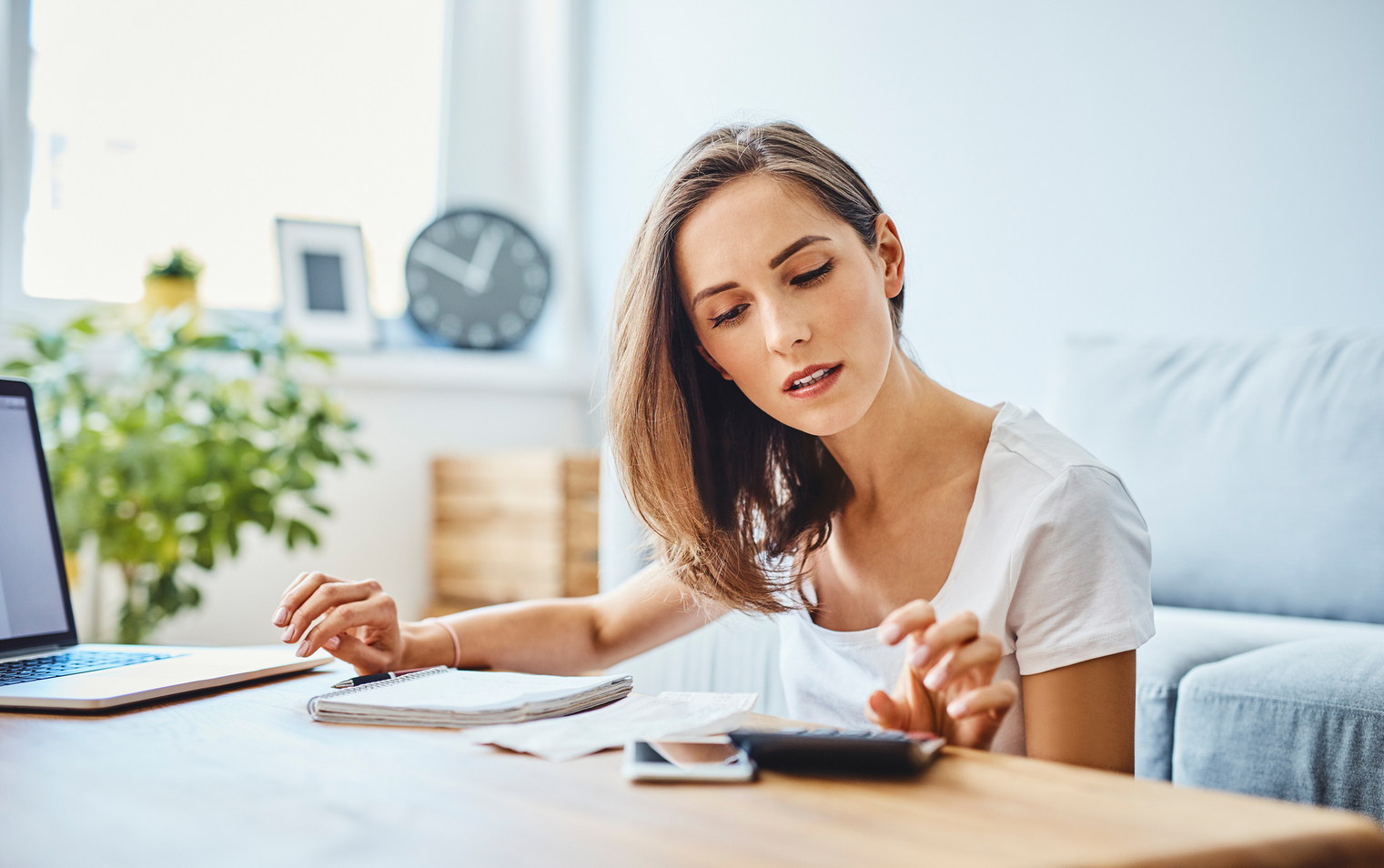 Personal financial service companies like The Financial Gym, StashWealth, or Modernist Financial can help with this process. For example, the Financial Gym, whose customers are predominantly self-employed, helps its clients “get out of the day-to-day grind” and think about big picture goals, writes director of Trainer Academy, Joy Liu. According to Liu, once those goals are set, “Certified Financial Trainers create a customized financial plan that gives the client a road map of how to organize their finances by separating their business expenses from personal expenses, plan for taxes, and regulate their income in order to create the illusion of a regular, stable paycheck.”

Find good housing. Consider the cost of living when looking for a place to live. Is it a good area to live in long-term? If you’re renting, is your space rent-controlled? “Set yourself up for having low overhead in your living situation,” says Boji. “I keep my expenses really low. I’ve lived in the same rent-controlled apartment for the whole time I’ve lived [in Los Angeles].”

“I don’t know how somebody could just freelance below the line and . . . save money in Los Angeles today”

Find your niche. “The more willing you are to do something other people cannot or will not do, the more likely you are to make money,” says Schultz, who came to financial planning later in her career as a way of focusing her work as a freelance writer. Taking an online course, receiving certification, or simply keeping up with developments in your field can be a great way to learn new skills and give yourself an edge over competitors. Use time between jobs as further opportunity for honing your skills. As Dunn writes, “To be able to do the thing you want, you already have to be doing it.”

Know your worth. Don’t undersell yourself by pricing too low for your services. Set a reasonable yet competitive rate based on the market, and avoid becoming too reliant on a single employer for jobs simply because you’ve contracted with them before. “It’s good to have a solid group of three or four [employers] that you work with regularly,” says Boji.

Find a side hustle. Whether you’ve got consistent work or not, it’s always good to find a side hustle, as Kramer attests. “[My husband and I] have multiple side hustles,” she says. “On top of our rental properties, we invented a product that we sell on Amazon that makes $60,000 to $70,000 a year. I don’t know how somebody could just freelance below the line and be able to save money in Los Angeles today.”

Schultz put it best: “There are plenty of people in the past who have worked for the post office while they wrote their novel.”

Talking about how we make, spend, and save our money is something few of us want to discuss openly, yet research shows that doing so could actually help us earn more. So let’s get comfortable with getting uncomfortable. Who knows? Maybe we’ll learn a thing or two.