Race to the Top: Andrew Buckland on Editing Ford vs. Ferrari

One half of the Oscar-winning editorial team behind Ford vs. Ferrari, Andrew Buckland explains the magic behind the film

Hot off wins for Best Film Editing at the Oscars, BAFTAs, and Eddies, Andrew Buckland has had a crash course in awards season excitement with director James Mangold’s film Ford vs. Ferrari. (Not so for Buckland’s frequent editing partner Michael McCusker, who, in addition to Ford vs. Ferrari, won an Eddie and was nominated for an Academy Award in 2006 for Walk the Line, another Mangold film.) Buckland just finished editing the upcoming feature The New Mutants when I caught up with him to discuss how he began his partnership with McCusker and Mangold, cutting high-energy action, how he feels about all these awards, and more.

Ford vs. Ferrari is the fifth film Buckland has worked on with McCusker, four of those with Mangold. The three met for the first time on Mangold’s 2001 film Kate and Leopold, which shot in New York, where Buckland was an assistant editor. “They rolled into town, and I was hired to work on the film and met Mike [McCusker] and Jim [Mangold],” he remembers. “Mike was actually the first assistant working for David Brenner for that film.” Once the shoot wrapped, the entire team sans Buckland returned to Los Angeles to finish the film.

Despite being on separate coasts, “I stayed in contact with Mike, and we became very good friends,” Buckland says. Eight years later, McCusker invited Buckland to come to Los Angeles and assist him on Mangold’s action-comedy Knight and Day. By that point, McCusker had become Mangold’s editor of choice and had cut his Oscar-winning Walk the Line and acclaimed western 3:10 to Yuma. How could Buckland say no?

Three films later, Buckland is now in the editor’s seat, and Ford vs. Ferrari is the first Mangold film Buckland and McCusker have cut together. The progression was organic, says Buckland, adding, “I already had an established relationship with Jim, and Mike and I work really well together. So it was just natural that I would step into that role.”

In some international markets, Ford vs. Ferrari is called Le Mans ’66 because the film depicts events leading up to, and during, the historic 1966 Le Mans race where the underdog Ford Motor Company attempted to dethrone reigning champion Ferrari. The Le Mans race itself is a punishing 24-hour run through the French countryside. It’s a huge part of the story, taking up the last third of the film and crackling with tension and energy the entire time.

Everything about Le Mans is epic, including the edit. “The film shot primarily in California, but for Le Mans, they shot in Georgia for those country road scenes,” says Buckland. Parts of Georgia might look like the French countryside, but it was a challenge finding the precise road curves and terrain that would be an accurate match for the original Le Mans course. “They had to find these individual sections of roads — like Mulsanne Straight, Mulsanne Bend, and the Esses — and shoot those parts,” he says. “It was up to us to make it seem like one continual track. It took a lot of time to put that together.”

Between the first and second units, a deluge of dailies came in, but Buckland says navigating the workflow between him and McCusker was “pretty fluid, actually.” Because of the volume of material, it wasn’t realistic to lay claim to particular scenes or sequences. “If Mike was working on a large chunk of Le Mans, other scenes would come in, and Mike would say, ‘Hey, look, I’m buried, and all this stuff is coming in. Just take it.’ It was very free flowing.”

Before filming, McCusker and Mangold spent several months mapping out Le Mans with previs guru Clint G. Reagan. Buckland came on at the tail end of that process. “About 70 percent of that race was previs, used to understand what type of shots we would need to create the dramatic effect of driving that course,” he says.

This pre-shoot preparation not only helped production get the shots they needed as efficiently and safely as possible, it also helped in the edit. “As these pieces were coming in, we understood what section of the race and scene these shots would go,” Buckland says. “It wasn’t like these random shots would come in, and we would have to figure out how to put it together from scratch. If that was the case, we would probably still be cutting!”

One especially difficult scene to navigate in the edit was the dirt-track competition at Willow Springs. If you’ve seen the film, it’s the race where Ken Miles (Christian Bale) throws his wrench at Carroll Shelby (Matt Damon) but ends up breaking his own windshield just before he has to start this epic endurance race.

“I love bringing a performance or a scene to life, where the viewer is suddenly unaware of the editing and cinematography, of the process of filmmaking, and is just experiencing a true, emotional moment.”

Unlike Le Mans, the Willow Springs race was storyboarded but wasn’t prevised. That meant it was conceived and shot a bit looser, which led to some trouble in the edit. In the scene, Buckland says, there was supposed to be “a feeling that this race has been going on for a full day. It was written that way in the script, but it wasn’t apparent in the footage, so we had to find the beats and the moments to break the film up and give it a sense of time passing.” Their work paid off: In the film, the race feels both thrilling and punishing as Miles fights through exhaustion and the other drivers.

“That’s a scene I’m happy we were able to crack, because initially you could end up cutting that scene to feel like it’s just one lap. We had to really find how to expand it, but it’s not apparent when someone watches it,” he says. “That’s the wonderful thing about editing. I love bringing a performance or a scene to life, where the viewer is suddenly unaware of the editing and cinematography, of the process of filmmaking, and is just experiencing a true, emotional moment.”

His theory on why audiences are responding so enthusiastically to the movie comes down to a misconception people may have: that Ford vs. Ferrari is just going to be a Fast and Furious-type of hypermasculine racing film. “I think the movie surprises people,” he says. “They’re not expecting the intimate story of these two craftsmen struggling to create something original and the heartbreaking nature of it.” 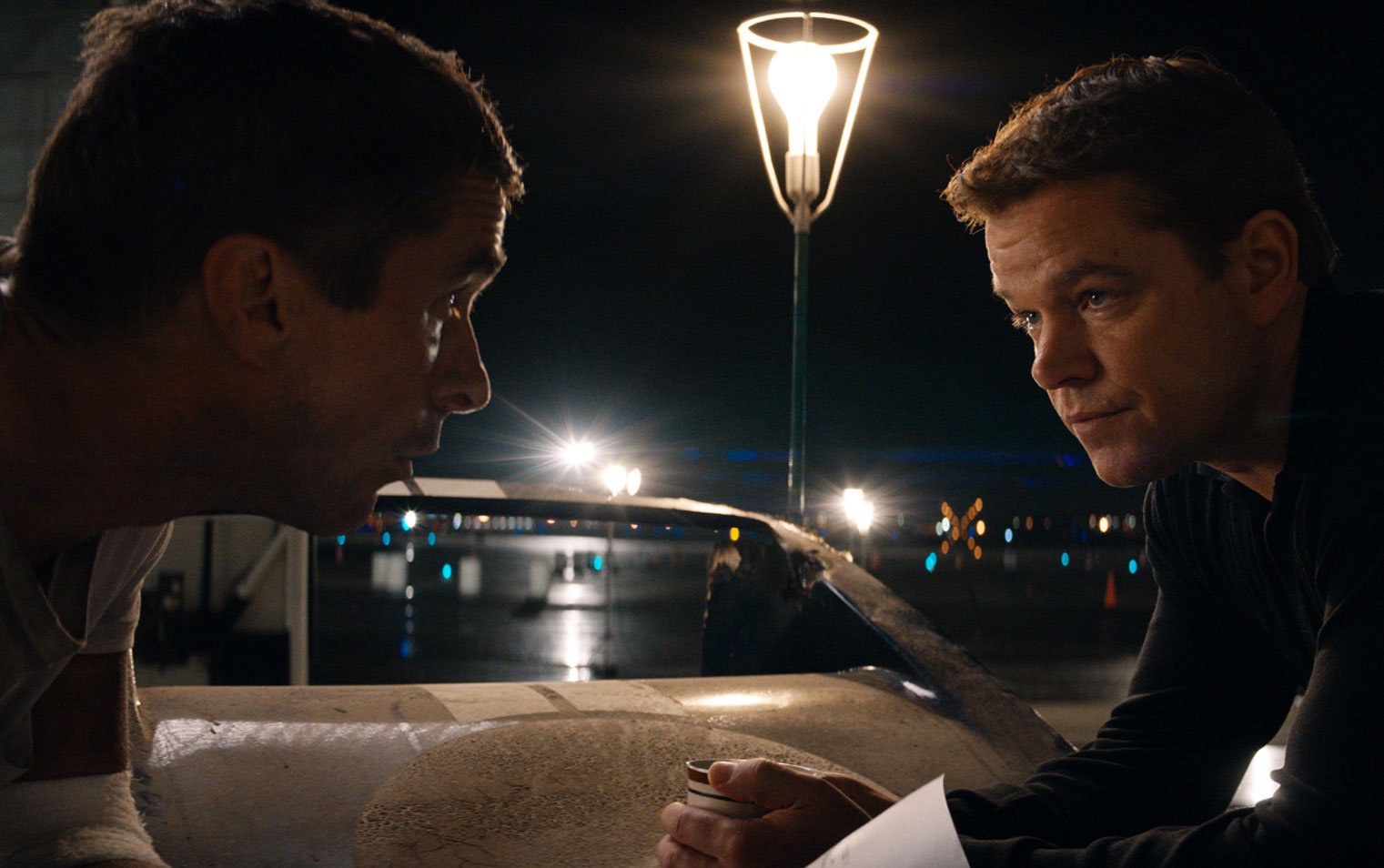 If there’s one thing that comes across when speaking with Buckland, it’s that he really, truly loves the film, but not because of the titular rivalry. While that competition with Ferrari does push Ford Motor Company to build the new GT40 race car, “The Ferrari aspect of it is this sort of external goal of winning a particular race,” Buckland says. “What I love about the film, personally, is that the true adversary is within the company. It’s more like ‘Ford versus Ford,’ and all the machinations of trying to get this amazing thing off the ground, and all the corporate bullshit that one has to deal with in the process.”

The first inkling that the movie might be a hit came during the audience test screenings. “When you’re working on a movie, you’re very close to the process of it,” Buckland says, “so it’s great to get an honest response from people who are not involved in it.  We previewed the movie twice, and each time the response was incredible. That was the moment where everyone looked at each other, like, ‘OK, I think we’ve got something.’”

All this awards buzz is a bewildering, new experience for Buckland. “I think it’s a huge honor, and I’m a little speechless about it because when we work on these movies, that’s not our goal. Our goal is to make a great movie and to realize Jim’s vision, and then all the energy and anticipation is on ‘Will people respond to the movie?’” he says. “I just feel so happy that people really respond to this movie, and they like the work that was done, and they want to celebrate it.”