Resources for Black Filmmakers: A Guide 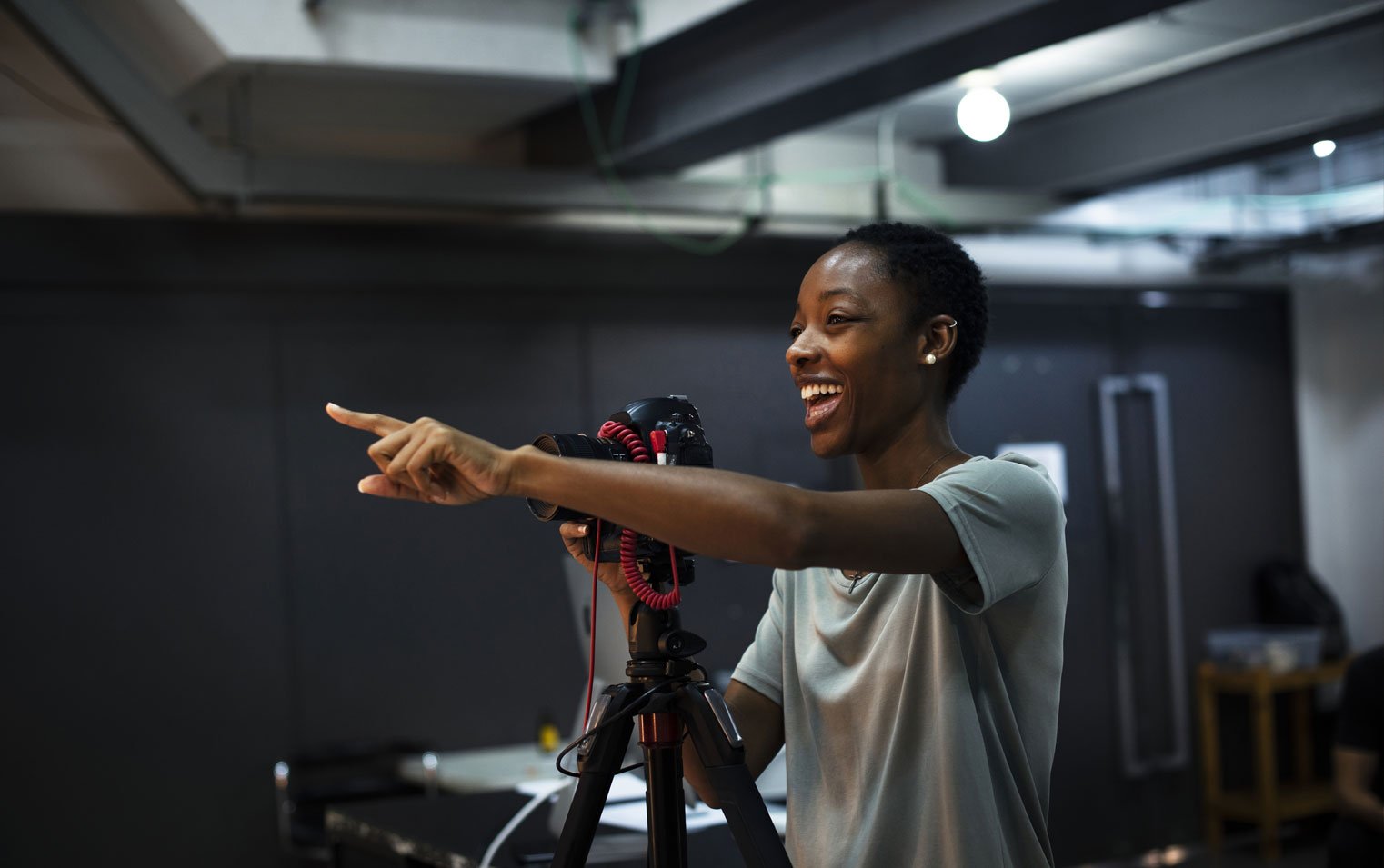 Huge strides have been made for black filmmakers in the past decade, with growth in representation, critical acclaim, and box office revenue. Some examples include Ryan Coogler’s 2018 Black Panther, the most-tweeted about movie of all time, ranked as the #3 all-time domestic-grossing film. Then there’s Ava DuVernay, who became the first black woman to direct a $100-million feature with A Wrinkle In Time, while Barry Jenkins (Moonlight), Peter Ramsey (Spider-Man: Into the Spider-Verse), and Jordan Peele (Get Out) became the first African Americans to win Academy Awards in their respective categories. Game-changing TV shows like Insecure, Atlanta, and Queen Sugar have also made a splash.

While celebrating this progress is important, there’s a long way to go towards a more inclusive film industry. According to a report by the USC Annenberg Inclusion Initiative, 14 percent of the directors of 2018's top 100-grossing movies were black. That’s a 270 percent increase over 2017 and a 200 percent increase from 2007, but it’s still nowhere as high as it needs to be in terms of representation. Of the top 300 grossing movies from 2016 to 2019, only 11.4 percent of producers behind them were people of color. It’s clear that more executives and producers of color are needed to help greenlight and fund black film projects.

Social media has helped bring attention to the lack of representation in the film industry with campaigns like #OscarsSoWhite while also acting as a powerful promotional tool. In a 2019 New York Times interview, a group of 1990s black filmmakers were asked: “What’s different now for black directors who are breaking through?” Social media was a resounding answer. “Social media is a game changer. People can know what you’re doing in real time, without hiring a publicist,” said Julie Dash, director of Daughters of the Dust.

“I think it’s also a cultural shift,” added Leslie Harris (Just Another Girl on the I.R.T.). “The culture is changing. The racist statues are coming down. Black Lives Matter. Even #MeToo has changed things a bit . . . It’s going to be forced to change by the culture, by young people. Now social media can amplify some of the injustices that are going on.”

In hopes of helping the next generation of black filmmakers rise up, we’ve compiled a list of African-American filmmaker associations and collectives, networking and mentoring resources, information on diversity in the industry, and more.

The Blackhouse, founded in 2006, helps black creative voices and executives gain a better foothold in film, TV, digital, and emerging platforms. It’s committed to highlighting the power of black writers, producers, directors, and executives telling black stories. The Blackhouse uses its extensive relationships in the film and television industries to help educate, inspire, and support budding and experienced filmmakers, producers, and executives on the craft and business of filmmaking. The organization also has a fellowship program for young, aspiring black filmmakers and film producers, in addition to hosting member events and promoting Blackhouse at film festivals.

Started in 2014 in the New York City area, the nonprofit Black TV & Film Collective aims to create opportunities for artists of color to achieve their long-term career goals in TV, film, and digital entertainment. The collective leads professional development events and workshops, coordinates relationship-building events, and provides opportunities for artists of color to showcase their talent via original content production. Check out the membership database or member’s projects board to connect with other members or recruit crew for your project. The organization also hosts members-only and public events such as the Speaker’s Series, the Pitch Session, and the Filmmaker Meet and Greet.

The Black Association of Documentary Filmmakers - West (BAD West), formed in 2003, is a professional organization providing people of African descent working in documentary film, video, or other media the opportunity to network professionally, share resources, exchange ideas, and meet socially to enhance the development, production, promotion, and exhibition of documentaries. BAD West also advocates for the recognition and professional advancement of black documentary filmmakers.

Cast and Crew of Color is an online professional network developed by and for people of color to facilitate collaboration and empowerment. Membership offers opportunities to connect with employers working to diversify their productions and workplace, find collaborators, post jobs and information about funding, and more.

Established in 1986, the Organization of Black Screenwriters addresses the lack of black writers in the entertainment industry. It helps film and TV screenwriters create — through classes, writers’ groups, and cold table reads — and present their work to the industry.

Black Public Media develops, produces, funds, and distributes media content about the African-American and global black experience. For forty years, it’s addressed the historical, contemporary, and systemic challenges that traditionally impede the development and distribution of black stories. It offers scholarships for emerging filmmakers as well as funding for projects at R&D or completion stage.

The Sundance Institute offers the excellent Inclusion Resource Map, a searchable database of opportunities and programs available to U.S.-based artists from underrepresented communities.

The Garrett Scott Documentary Development Grant, now in its fourteenth year, funds first-time documentary directors for travel and accommodations to attend the Full Frame Documentary Film Festival, where they get to present short excerpts from their works-in-progress and have access to films, discussions, and mentorship by experienced filmmakers.

Cinereach develops, produces, finances, and supports feature-length fiction, nonfiction, and hybrid films crafted for the big screen, offering grants and fellowships. They work with unknown and established filmmakers who may face creative, financial, or systemic obstacles to realizing ambitious visions.

For the past twenty-five years, Film Independent’s Project Involve has been a leader in the ongoing fight to build a more inclusive and equitable industry by supporting emerging filmmakers from underrepresented communities. It pairs participants with mentors at the top of their respective fields and provides hands-on filmmaking experience from pre-production through premiere. It offers fellowships and funding for short films and showcases them at various events.

Started in 1978, the Black Filmmaker Foundation designs and administers programs that address the institutional disenfranchisement of black filmmakers and black audiences. It produces an annual film critics symposium at the Museum of the Moving Image in New York City.

The Black Hollywood Education and Resource Center, a nonprofit founded in 1996, advocates, educates, researches, develops, and preserves the history and future of African Americans in the film and television industries. It also organizes film festivals and provides educational programs and scholarships.

Black Film Center/Archive at Indiana University in Bloomington holds a library of films and related materials by and about African Americans. Its newsletter, Black Camera, serves as an academic, professional, and community resource.

Danielle A. Scruggs founded Black Women Directors, an online resource, in 2015. It’s an ever-growing digital library where people can learn more about black women filmmakers and discover the diversity of the community in terms of genre, styles, and types of stories told.

Guided by its mission to promote and support diversity in filmmaking, Blackfilm publishes film, television, theater, and digital editorial, news, and entertainment content. Since 1999, it’s also presented a film screening series showcasing the works of independent filmmakers of color.

In addition to the bigger-name festivals such as Sundance and the Toronto International Film Festival, a few that cater to black filmmakers include: the American Black Film Festival, called “the nation’s largest gathering of black film and television enthusiasts”; the Pan African Film + Arts Festival, a well-established (started in 1992) festival that showcases high profile and emerging filmmakers; the Black Harvest Film Festival, highlighting independent films ; the African Diaspora Film Festival, which screens in four different cities; and Urbanworld (started by HBO), which showcases film, digital, and music works.

Need statistics and reports on diversity and inclusion in entertainment? Turn to the Annenberg Inclusion Initiative. It produces insightful research papers and reports, like the one mentioned earlier, and develops targeted, research-based solutions for tackling inequality. The organization also created the Inclusion Rider, which Frances McDormand famously called out at the end of her 2018 Oscar acceptance speech. The rider has language that actors, producers, and directors can bake into their contracts to legally bind the movies and shows they make to engage in a good-faith effort to employ minorities on screen and on their production staff.

Did we overlook a resource? Send it to us on Twitter, Facebook, or Instagram, and we’ll see how we can promote it. We’re @madewithSHIFT across all platforms.