What’s a Manifesto? Why Do So Many Companies Want One?

Once a screed associated with political philosophers and art movements, today it's the deliverable often assigned to copywriters 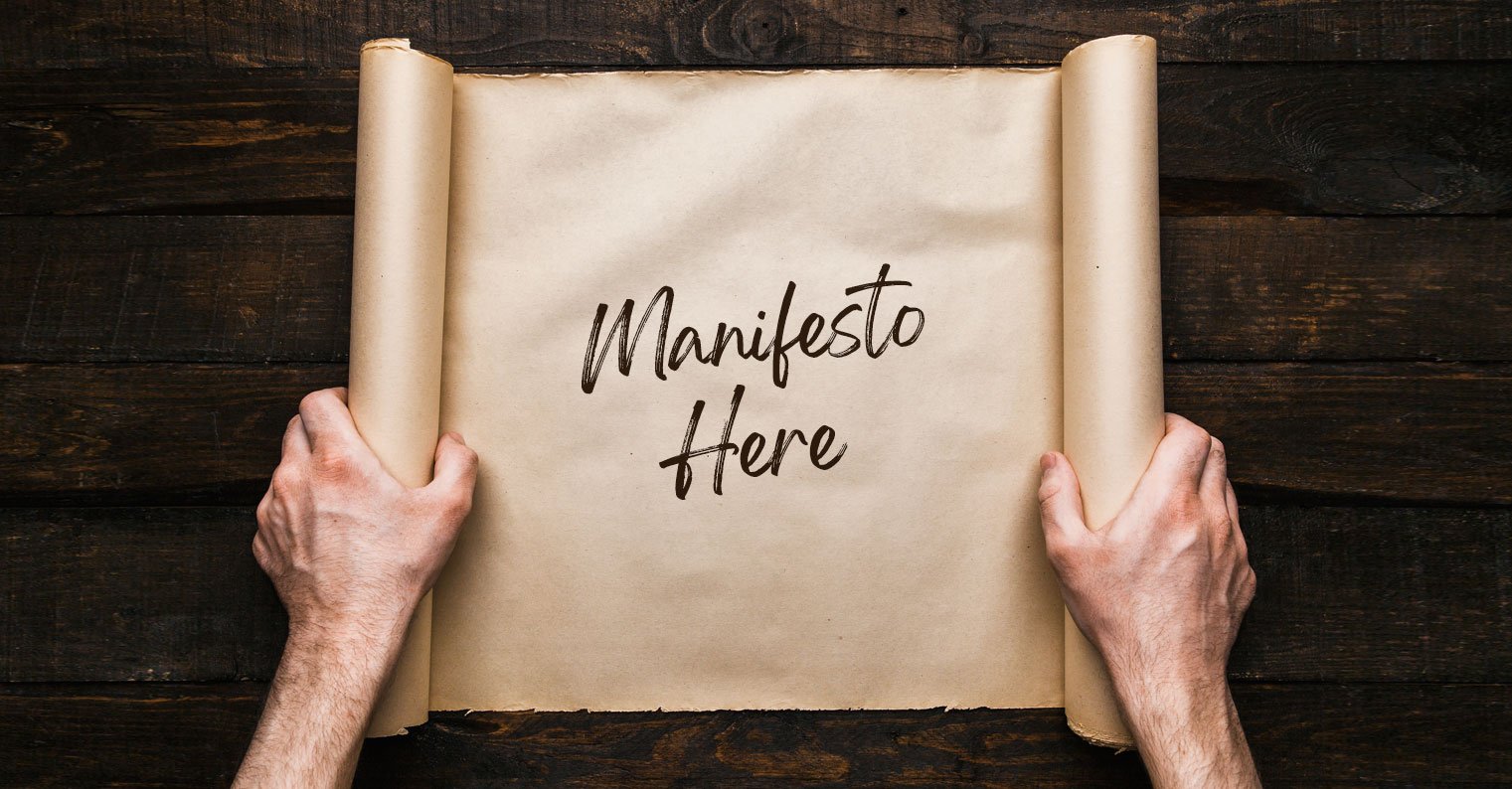 For the layperson, “manifesto” might call to mind Karl Marx’s The Communist Manifesto.

They wouldn’t necessarily be wrong. Oxford defines manifesto as “a public declaration of policy and aims, especially one issued before an election by a political party or candidate.” True to Marx, the manifesto was initially forward-facing political writing and remained that way for decades. Wikipedia turns up dozens of manifestos, including the Declaration of Independence.

In the early twentieth-century, artists started using them, too, to define the philosophy and aims of a movement. The Futurists, Dadaists, and Surrealists all produced manifestos, and the practice is still in use today. (Cough, Dogma 95, cough.)

Eventually, corporations would eventually borrow and run with the practice. So much so that, as a professional copywriter, the manifesto is the single most common thing I’m asked to write.

What exactly is a manifesto?

In the world of advertising, a manifesto is a timely piece of writing that helps a company move its branding or marketing forward. It’s usually short — no more than half a page — and meant for an internal audience (at least initially) to help key stakeholders within a company or organization articulate what it stands for and where it’s going at that moment in time.

The very best manifestos are a kind of North Star.

In contrast, an organization’s mission, purpose, and vision are evergreen statements, while a manifesto spurs action and emotion in the moment. It’s an argument for a better way of doing things, a big exciting idea, social or political stance, or core belief that an entire company can get behind. Manifestos often need an enemy or something to fight against or an action to take.

The very best manifestos are a kind of North Star. They help staff align and work together towards a goal or shared future. The very best also become a kind of litmus test; any new idea or initiative, when measured against it, makes perfect sense. You’ll know you’ve got a good manifesto when people from all parts of an organization read it and immediately want to reread it.

One of the most enduring examples is Apple’s “Here's to the crazy ones."

Notice it doesn’t talk about what Apple makes, much less what their products do. It’s really about the company’s raison d’être and how the consumers that Apple targets think about the world.

Note, too, the clear, unstated enemy: regular ways of thinking and the boring computers “normal” people use. This was, of course, turned into a public-facing TV commercial featuring some of the greatest visionaries of the twentieth century. It’s basically a way of saying we build our products for smart creative people, because we’re just like them, so if you think you’re smart and creative, Apple is the computer for you — but written in a way that still resonates decades later.

Another great example is the Johnathan Adler manifesto that hung in the company’s store windows in the early 2000s. It takes the once very popular approach of listing all the stuff they believe in.

See, every sentence starts with what the brand believes and, by extension, what it opposes. It’s decidedly against unhappy homes, straight men doing the decorating, and so on. You immediately get a super clear understanding of the brand personality.

While these are both examples of a “what a company stands for and believes” manifesto, there are lots of other ways to write one, particularly because one of the goals of a good manifesto is to say something a brand can articulate in a way that’s never been said before. No easy feat.

I’ve read and written manifestos about where a company is headed — a true manifesto in the dictionary definition sense of the word — and I’ve seen some that express how a company will make life better for consumers and the world. I’ve also seen others that communicate where a company came from and how it’s recapturing its core values.

Really anything that gets people to listen, pay attention, and commit to a shared course of action is fair game.

So what's a manifesto for?

In Apple’s case, the manifesto was transformed into a public-facing, award-winning TV commercial. For Johnathan Adler, it became a poster to bring consumers into their brick-and-mortar shops and help them feel connected to the store.

But not every company has a TV commercial budget or wants to a hang a huge piece of writing in their windows. And yet they all want a manifesto.

One the of most difficult manifestos I ever had to write was for a local retailer quickly opening stores up and down the West Coast. They already had a manifesto from a few years back, but they wanted one that was more representative of their newfound expansion.

I wrote seven completely different drafts initially, each with a different idea at its heart. Some were more about the product; others about the company culture. The design firm that hired me to work on it selected one that we all really liked. I fine-tuned it, and we presented it to the client, who rejected it.

Over the next two months, we submitted one version after another, each based on parts and pieces of the other six drafts. Finally, after yet another version was rejected for being close but not exactly right, the CEO asked point-blank: What’s the point of a manifesto?

And there it was. We’d spent months perfecting copy for a client who didn’t really even know what purpose it served, never mind having any plans to use it.

Think of this article, then, as a response to that CEO’s long-ago question.

A manifesto is typically used when an organization is branding or rebranding, which is usually a collaboration between the company leadership, its brand team, and an external design agency. Manifestos are also in play when a company develops an ad campaign usually spearheaded by its marketing department and outside ad agency.

And while branding and advertising can overlap, they’re ultimately different beasts, resulting in two kinds of corporate manifestos with different goals. Let’s break them down.

To the average Joe, branding is a company’s logo, the fonts it uses, the colors associated with it — its entire look and feel. For a long while, this is how companies thought about branding too, but developing a brand voice and tone has come into greater focus due to the multiple channels businesses can now talk to customers. There’s a company’s website, its many social media accounts, billboards, retargeting ads that follow you across the Internet, TV and radio commercials . . . you catch my drift.

There can be multiple writers (and even non-writers) producing all these words for a company, but to maintain a consistent voice and tone, they need a bible for “speaking” as a singular personality to their various audiences.

That’s where a brand manifesto comes in. It’s traditionally found in a brand book, kicking off the section on voice and tone. The manifesto articulates a brand’s values, where it’s headed, or why the brand remains relevant. How it communicates those informs the way the entire brand “talks.”

An advertising manifesto serves a different purpose. Agencies use it to sell a campaign to a client. Most campaigns are pinned to an idea expressed through commercials, videos, billboards, banner ads, or wherever else the agency plans to market the campaign. The dot on the “i” of these channels is the tagline, typically expressed through just few words:

Ultimately, an advertising manifesto is a sales tool for an ad agency or marketing firm. It’s meant to sell and set the tone for the tagline and campaign. That’s why it often lives only in a presentation deck.

The exception, of course, is when a prospective client likes the manifesto so much they decide it should become T-shirt, the company’s new About Us webpage, or even an in-store floor-to-ceiling poster or Super Bowl commercial.

After all, the best manifestos are not only super compelling, they’re often quite expensive after the agency fees pile up. Why not get some public use out of them too?

Here’s where things get a bit messy.

Brand manifestos don’t need a tagline, but they sometimes include one that can become a company’s tagline. Advertising manifestos usually include a tagline that’s often an ad campaign tagline but can become the overall company tagline.

Think of a monster brand like P&G. It has its own branding and advertising, while its subbrands, like Gillette, Secret, and Old Spice, have their own branding. Then, each of those subbrands might have multiple product campaigns running at once, each of which can have its own manifesto and tagline, any of which might change year to year . . . leading me to think the best definition of manifestos may very well be “job security for copywriters.”

Andrew Dickson is a freelance copywriter who works for clients like Apple, Ikea, and Adidas. He likes freelancing so much he co-created Mt. Freelance, an online course and community designed to help creative freelancers freelance better. Before going out on his own, he spent seven years at Wieden+Kennedy Portland writing ads for brands like Old Spice and running the WK12 ad school. Before that, he was a freelance set dresser, performer, and eBay PowerSeller. Besides freelancing and writing about freelancing, he also performs regularly, hosting storytelling events for The Moth and auctioneering events for schools and nonprofits.
Read more by Andrew Dickson