When Your Short Film Uses Live Action and Marionettes 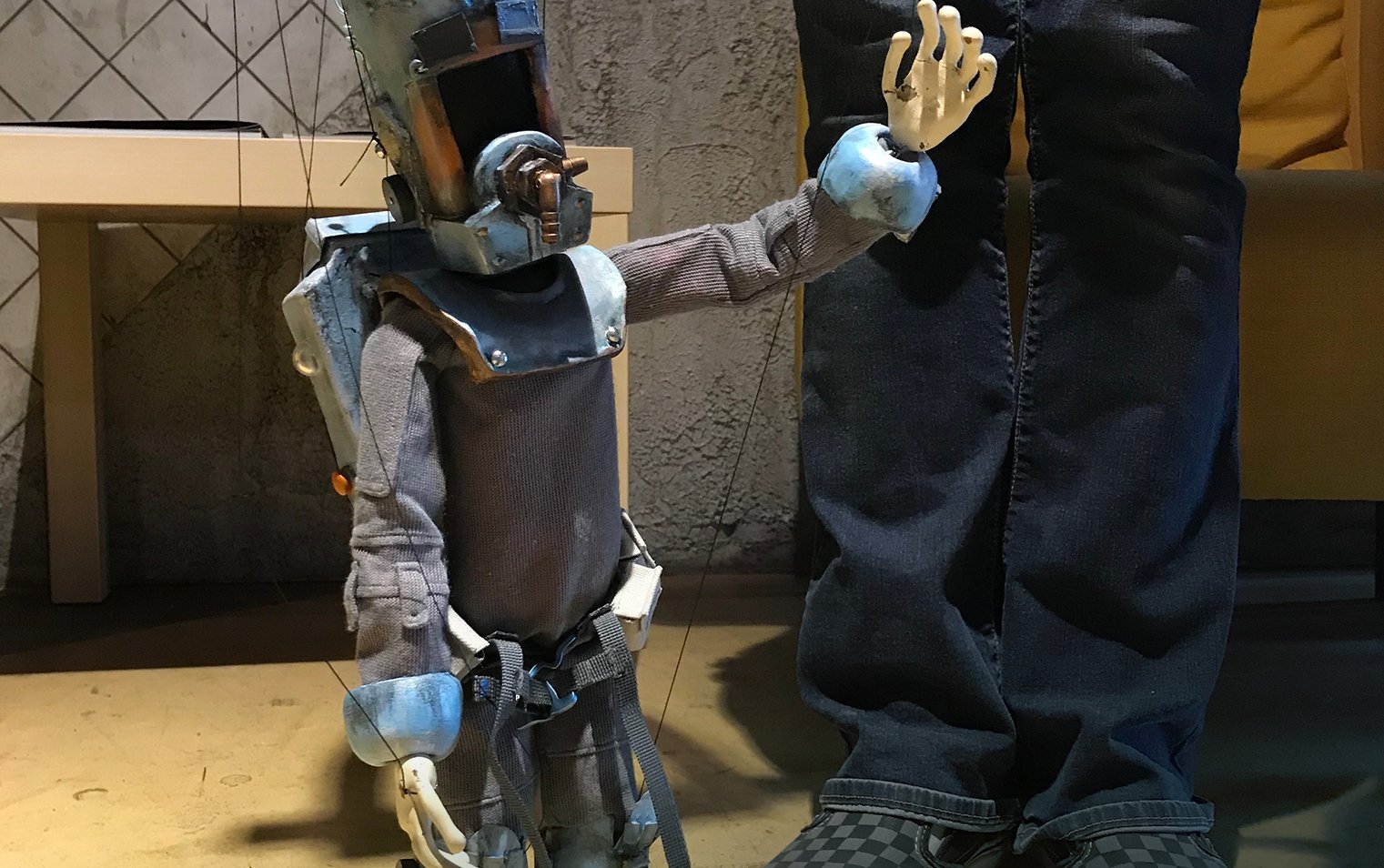 Rounding out the first installment of posts from the inaugural cohort of our Shift Creative Fund, producer Christian Hall provides a detailed account of the pre-production and production process for Cosmic Fling, a truly unique short film that fuses miniature sets, marionette puppets, and live actors. Together with director Jonathan Langager and their crew of talented puppeteers, VFX coordinators, and more, the team made it through an intensive three-day shoot that required a total of 100+ shots. Let’s find out how they prepped for success.

Cosmic Fling is a story of resilience in the pursuit of love. Stan, its protagonist, is the sole resident of a desolate moon, a cosmic garbageman who harpoons space debris and dumps it into a crater. One day, a comet whizzes by, and he sees a beautiful astronaut — Beatrice — looking back at him. Her comet shoots across the sky and disappears, returning periodically to zoom past again. Stan devises a plan to spear it and tether it to the cold rock he calls home. He and Beatrice will then climb across the vastness of space to meet.

For my and Jonathan’s story, the journey from script to screen has spanned more than six years. Two other attempts to make Cosmic Fling fell short, but as a testament to our own resilience, we persevered with partnerships, adding the Shift Creative Fund to our list of collaborators.

Giving credit where it’s due

But, for principal photography, you need a solid team of talented, highly skilled, and generous filmmakers. Cosmic Fling writer and director Jonathan Langager and I met in 2012 at the University of Southern California, where we worked on his thesis film Josephine and the Roach. I was developing an optical motion capture software and required use cases for consumers, and that’s how Cosmic Fling was born. We thought we’d use CG paired with motion-capture animation, but time constraints kept us from getting the film off the ground. Jonathan and I stayed excited about it, but years passed, and it wasn’t until we gave the script to Taylor Bibat, a producer at Fonco Studios, that using marionettes for Cosmic Fling instead of CG was proposed.

We began working with Sam Koji Hale, producer at Handmade Puppet Dreams and director of Yamasong, to bring the story of Stan, our intergalactic garbageman, to life. First, Sam provided sketches of Stan, then came the actual puppet, which had to be dressed, painted, and outfitted with the many components of Stan’s spacesuit. Some elements were built to deliver an on-screen effect, such as the button on Stan’s Waste-to-Nutrient Conversion Unit, which he needed to be able to push on his forearm. Out of it would pour sludge made from color-dyed oatmeal, but during production, we found that even the simplest of Stan’s movements — lifting and aiming his harpoon, for instance — proved maddeningly complex to perform. Marionettes are delicate and highly tuned instruments capable of sublime performances, but we needed an expert. 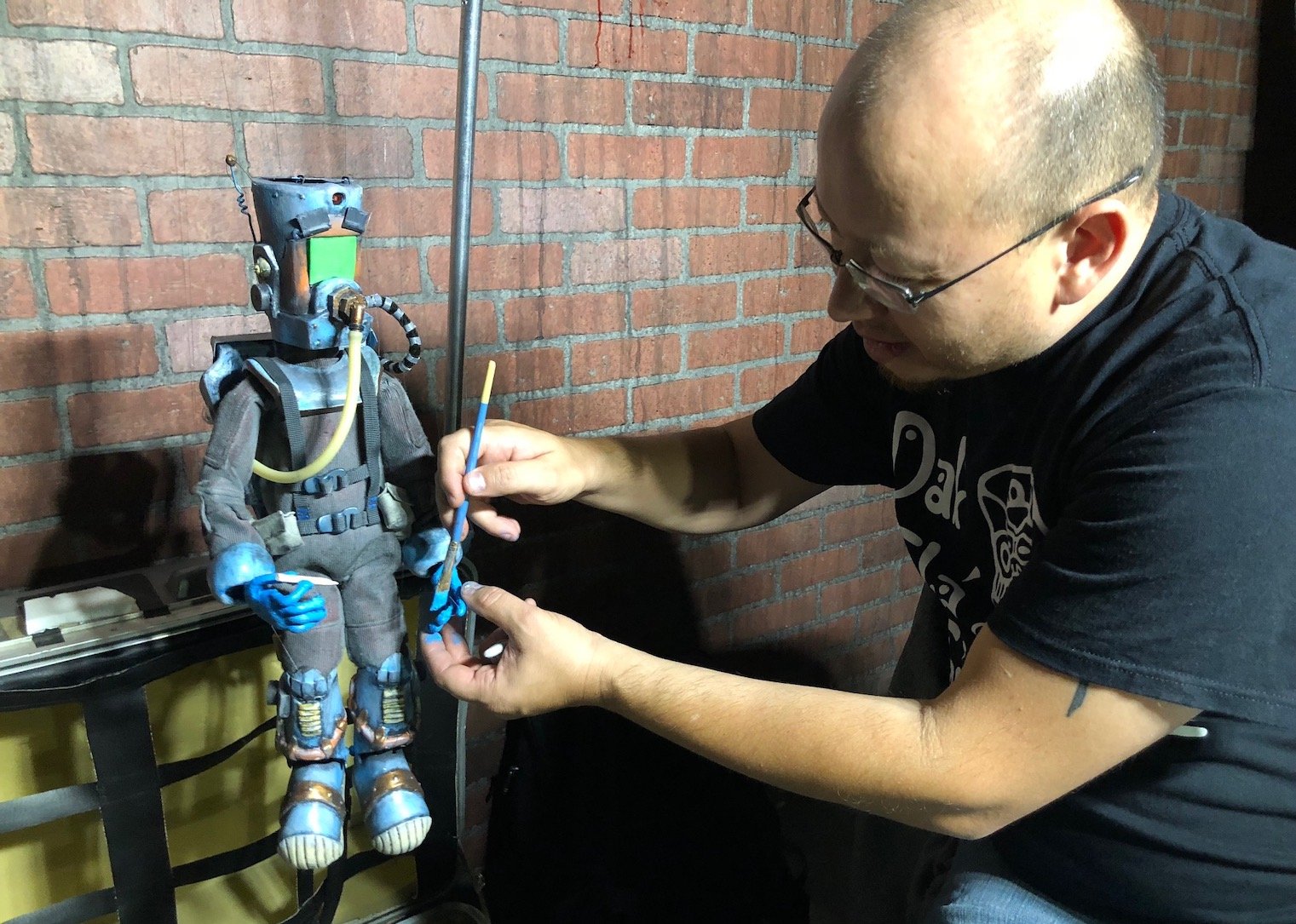 Luckily, we were able to bring in master marionettist Phillip Huber (Being John Malkovich, Oz the Great and Powerful). When Phillip took Stan in his hands, a new connection was formed, and our lead character came to life. Phillip and Jonathan practiced Stan’s movements — everything from aiming the harpoon gun to dancing in space — before the shoot. Seeing this firsthand as I did was an eye-opening gift.

My gratitude extends to Fon Davis, our production designer. Previously with ILM, he’s worked on such films as The Nightmare Before Christmas, the Star Wars prequels, Coraline, and projects such as the Disney Channel’s Penelope in the Treehouse and Eliza Rickman’s Pretty Little Head music video, which we collaborated on together. We used Fonco, his studio in Los Angeles, for the shoot and for designing, fabricating, and preparing our set pieces. Fon’s team of artists created the surface of the asteroid you see in Cosmic Fling, as well as the space debris and miniature versions of the asteroid and comet.

The calm before the storm

The film draws from a slew of filmmaking techniques, so preparation was complicated. Take, for example, the use of green screen to replace the background with a star field. Screen tests helped us decide if a practical star field using matte painting or cloth with light would achieve the effect we were going for. Jonathan and I prefer working with as many in-camera solutions as possible as opposed to relying exclusively on CG and digital FX. We love the filmmaking process and have an affinity for movies that use creative, in-camera techniques to build a unique world and inspire audiences to wonder how it was made. Cosmic Fling is no different: We combine actors Josh Fadem and Caitlin McGee’s live-action performances and composite them into the visors of our characters’ space helmets.

That said, budgetary and post-production parameters naturally played a role in our decisions. For example, using a painted star field would seemingly reduce VFX resources, but that’d mean contending with multiple strings from the marionettes. Even using minimal microfilament strings — which reflect a lot of light — during a screen test, the decision was clear. Without a green screen, it’d be more of a burden to digitally enhance or remove strings, as well as inadvertently draw attention to the strings interacting with the star field background. We knew from the get-go, though, that VFX would play a huge part in production, which would include set extensions, rotoscoping, animation, and numerous plate shots and inserts. To help us think through the process, we had conversations early on with VFX consultants and specialists.

In fact, it was the wisdom and genius of resident rock star Tim Hendrix — as on-set VFX supervisor — that guided us during production. He answered questions throughout the shoot, patiently listening as we wondered whether Stan’s helmet light should be on during certain shots or if our puppeteers should wear green suits in others. Tim understood which tasks would be easy in post-production and which wouldn’t. Joined by our primary VFX supervisor Ben Kadie, we developed a plan before shooting to address the impacts of VFX on 100+ shots in our film.

Given that many shots over a three-day period, we worked carefully with assistant director Lily Zeigler to come up with a shooting schedule based on lighting set-up and the needs of our miniature asteroid set. Typically, we’d sort shots by location to limit the number of company moves and then by time of day or what light would be available or necessary. Lastly, we’d organize shots by coverage or type, e.g., extreme wides to close-ups.

But for Cosmic Fling, marionettes were our stars, and we had a controlled sound stage and MOS environment for the entirety of the production, so we didn’t have the same kinds of constraints. Jonathan worked closely with Damian Horan, our director of photography, using the storyboards as a guide for each scene. We also had a dolly to bring movement to the shots, while the confined space of the miniature environment — Stan’s asteroid was built as a 8 ft x 12 ft surface and included his makeshift billboard home and lots of craters — allowed for intricate adjustments to the lighting set-up.

A matter of time

With time as your most valuable resource during principle photography, finishing 30+ shots per days is ambitious, especially with puppets. They involve so many unique factors, such as restringing marionettes for certain movements, replacing broken strings, and keeping strings away from the faces of Stan and Beatrice to limit rotoscoping. Performance-related variables, such as how the characters would dance together or climb ropes, also played a role.

Marionettist Phillip Huber inspects the miniature set as the crew looks on.

We anticipated some of these factors ahead of time, while others presented themselves on set. Controlling the wobble of Stan’s helmet, for example, required ongoing adjustments throughout the shoot. And Phillip, who we outfitted with a monitor so he could see his performance and respond more quickly to direction, did all he could to control the motion of the puppets. At the end of the day, though, they’re puppets. Total control of their movements is elusive.

Given these constant adjustments, there was very little time to spare, and Damian and his grip and electric team worked tirelessly to create the right lighting set-up for each shot. Lily negotiated the time for each, working closely with Jonathan and Damian to keep our schedule on track and brokering which additional takes we could or could not accomplish due to time constraints.

Meanwhile, Kat Roberts of Fonco Creative fabricated, painted, and dressed the many miniatures that made up Stan’s world. There were many distinct pieces of space debris that cluttered his asteroid set, including a bathtub and oil barrels. Each scene called for a slightly different configuration of Stan’s environment, such as various miniature billboard homes, to reflect the passage of time. And, because we shot out of sequence, Lily and the team kept a close eye on maintaining continuity. Some of the billboards were filmed clean, then used as backdrops for Stan’s day marks. We had a limited number of takes to film Stan marking the billboard in medium and insert shots.

One of the most complex sequences to film was Stan and Beatrice dancing in space. Even after rehearsing, swapping strings between our puppeteers in a confined lighting arrangement was challenging. We filmed that sequence on the last shoot day, and while it was difficult, nailing it was extremely rewarding. Jonathan played music to set the mood for each take, making Stan and Beatrice feel more alive than ever.