Resources for Women Filmmakers: A Guide

These networks, funding sources, and organizations are increasing the number of women in production and filmmaking 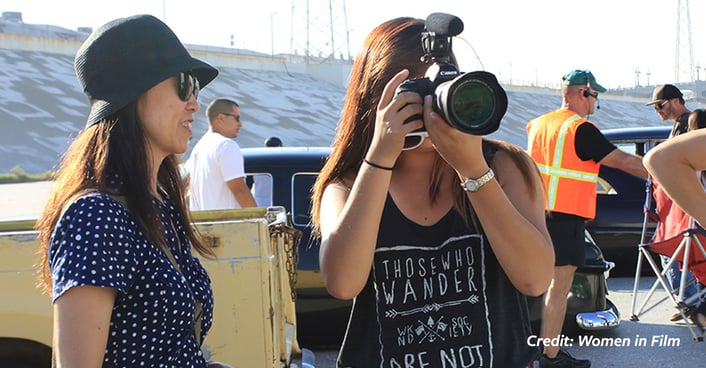 For the eighty-sixth time in their ninety-one-year history, the Academy Awards failed to nominate a single female director in 2019. This most recent awards snub is part of a bigger problem in the film industry. Women are dramatically underrepresented as directors, accounting for 10.6 percent of directors in 2019, according to the Inclusion Initiative. While that’s an increase of 7.9 percent from what it was in 2007, it’s still a disappointing ratio of 20:1 male to female directors over the past thirteen years. When we look at the ratio of white male to female POC directors, it jumps to a shocking 92:1. Things are only slightly better in film production, where women are listed as producers on just 18 percent of the top 300 movies from 2015 to 2018. (Only 1.6 percent of those were women of color.)

Connected to womens’ underrepresentation is the horrifying, ongoing abuse and harassment they’ve suffered at the hands of their male colleagues. More than a hundred years ago, the safe haven and social club Hollywood Studio Club opened to protect women working in film from rampant sexual abuse by their male colleagues. How far have we really come from those days? The revelations of Harvey Weinstein’s victims and the #MeToo movement show that sexual harassment is still a major industry issue.

Given this sad state of affairs, New York Times film critic Manohlo Dargis declared: “I wonder if it would be better for the powerful women in Time’s Up to forget about changing the old industry and just burn it down so they can rebuild it.”

There are signals Hollywood may be changing. Ava DuVernay hired all female directors for her TV show Queen Sugar, and there’s Ryan Murphy’s Half Initiative, which aims for more inclusive hiring in film. There’s also Time’s Up Now, an advocacy group for women in the industry and beyond. In the media, the challenges that women face are finally getting more attention from both traditional outlets (e.g., Ronan Farrow’s New Yorker expose of Harvey Weinstein) and on social media (#MeToo, #AwardsSoMale).

We’ve compiled a list of women filmmaker associations and collectives, networking and mentoring resources, film festivals, and more that’ll hopefully right the ratios and increase the number of women in film.

The Alliance of Women Directors (AWD) provides hands-on craft enrichment, mentorship, and education to women and gender nonbinary directors who directed at least one long- or short-form narrative film, television program, documentary, commercial, or new media program aired publicly by an established film festival or distribution company. “Although the current statistics show that women make up a small percentage of working directors, we are hopeful about the future of the industry because we know firsthand the tenacity and dedication of our members. Change is inevitable,” writes Nikki Braendlin, vice president of AWD, in an email. “We are also encouraged because of companies like NBC, CBS, Disney, Canon, and Fotokem who have partnered with AWD and understand and respect the intrinsic value of the voices of our members.”

Mary Lou Belli, honorary board member of the Alliance of Women Directors, teaches “How to Prep: Television Directing.” Credit: AWD

New York Women in Film and Television (NYWIFT) advocates for equality and supports women at every stage of their film and TV careers. It offers training and professional development programs, scholarships and grants, and a supportive community of peers. It also has a group called The Writers Lab that helps develop narrative feature screenplays written by women over the age of forty. NYWIFT is part of a network of fifty women in film chapters across North and South America, Europe, Africa, Asia, Australia, and New Zealand. Check each chapter to see which services and programs they offer.

Couch Film Collective offers grants, workshops, mentorship, and social events. The organization works to get women/nonbinary folx in front of and behind the camera at all levels of production. It’s an intersectional group that produces and supports equitable and inclusive projects that hire at least 51 percent self-identifying women/non-binary folx, 35 percent BIPoC, and are LGBTQIA2S+ inclusive.

Women In Film (WIF) offers funding, scholarships, a screening series, mentoring, workshops, and more. “The industry is in a moment of genuine transition, finally beginning to understand that the media we create must reflect the world we live in and that its current structures and systems also need to transform to accommodate that,” writes Maikiko James, WIF’s director of programs, in an email. “WIF is excited to be at the frontlines of this movement. We’re committed to these transformations at both the structural level and through elevating the incredible talent of the community we support.”

Women Make Movies supports women producers and directors through all phases of their careers, planting the seeds for a diverse and inclusive filmmaking landscape. In addition to being the world’s leading distributor of independent films by and about women, it offers a production assistance program for women working in independent media.

Verizon just announced its Future Fund, setting aside $5 million to support female-led entertainment projects. Those who receive funding will also get access to Verizon 5G Labs across the United States and RYOT 5G Studio production facilities in Los Angeles (for AR and VR content). Not Done, the first project being funded, is female-produced and directed and has an all-female and non-binary production crew. It airs on PBS on June 30, the 100th anniversary of the nineteenth amendment, which gave women in the United States the right to vote. 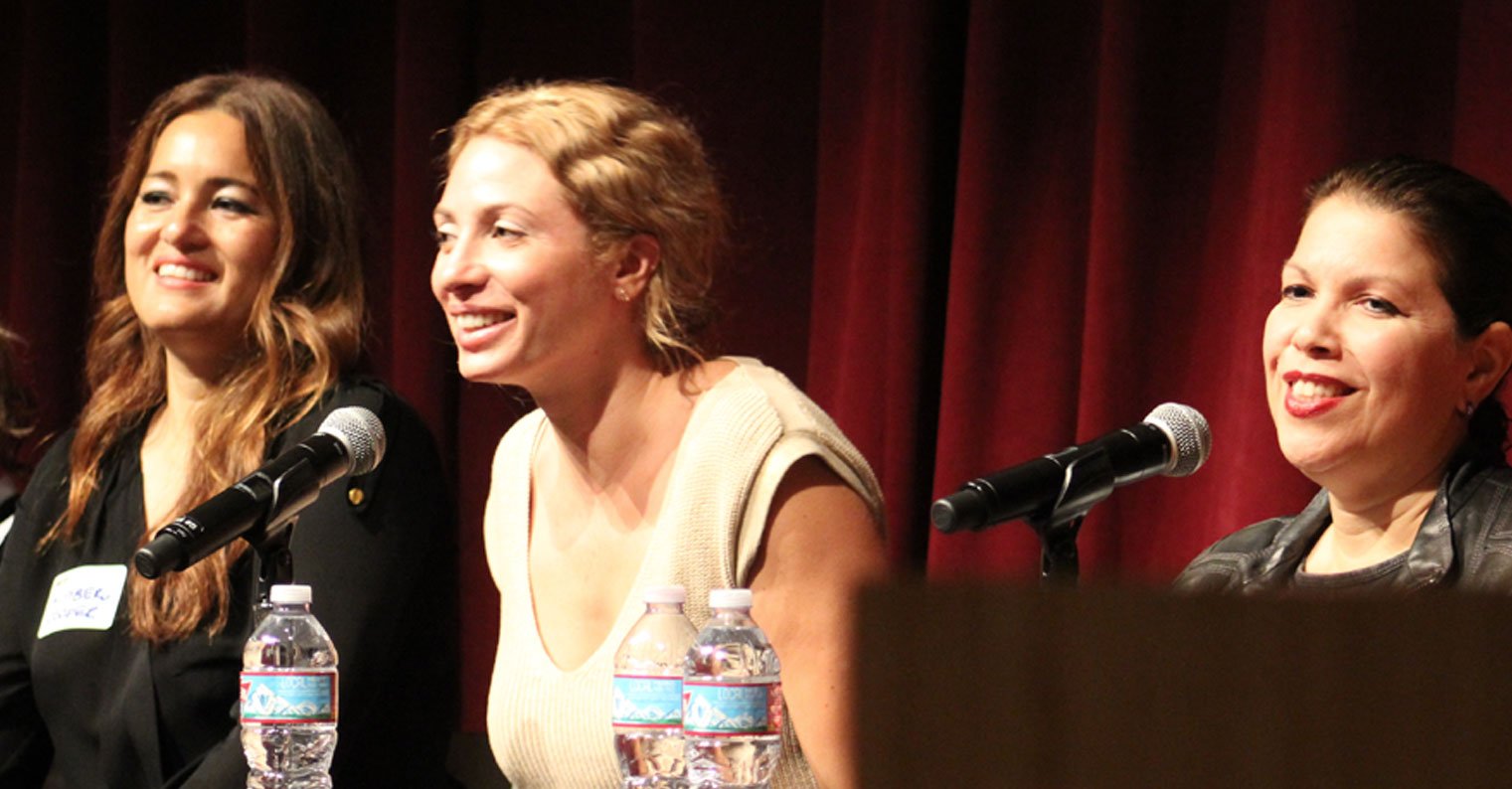 Chicken and Egg Pictures supports women nonfiction filmmakers at various stages in their careers. Since 2005, it’s awarded $7 million in grants and thousands of hours of creative mentorship to more than 300 filmmakers.

The Sundance Institute offers the excellent Inclusion Resource Map, a searchable database of opportunities and programs available to U.S.-based artists from underrepresented communities.

More locally, New York City-based women working in film or theatre can turn to the Mayor’s Office of Media and Entertainment, which offers grants, “speed funding,” and a screenwriting competition. For members of Washington, DC’s Women in Film & Video, Carolyn’s First Decade Fund has a professional development grant designed to help advance the careers of women in their first decade of working as media professionals and provide them with access to a larger film community and continuing skills development.

Women and Hollywood highlights women filmmakers and agitates for increased opportunities for them. CherryPicks compiles film reviews written by women from across the web, creating a score based on their reviews. (Scores have cheeky names like Run Don’t Walk, Catch it From Your Couch, and The Pits). Women Under The Influence shares the stories of cinema directed by women through events and media. Check out their fantastic watchlists of female-directed films, such as Sweet Dance Movies and Films of Resistance.

There are many festivals that cater to female filmmakers. Here’s a small sample:

A few female-focused, genre-specific festivals include:

The Center for the Study of Women in Television and Film at San Diego State University houses the longest running and most comprehensive studies of women in film and television. Dedicated to producing extensive and timely research, its studies provide the foundation for a realistic and meaningful discussion of women’s on-screen representation and behind-the-scenes employment.

Need statistics and reports on diversity and inclusion in entertainment? Turn to the Annenberg Inclusion Initiative. It produces insightful research papers and reports and develops targeted, research-based solutions for tackling inequality.

The Queen Collective program, developed in partnership with Procter & Gamble, Tribeca Studios, and Queen Latifah, seeks to accelerate gender and racial equality behind the camera. Its first act was funding short films by two directors whose work premiered at the Tribeca Film Festival and streamed exclusively on Hulu. One of the directors — B. Monet —  said at a press conference for her film, “It’s not that [women] are not amazing, and dope, and all these kinds of stuff. We need the opportunities. We need people to take chances on us.”

Did we overlook a resource? Send it to us on Twitter, Facebook, or Instagram, and we’ll see how we can promote it. We’re @madewithSHIFT across all platforms.